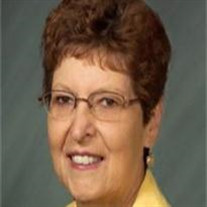 Our beloved wife, mom, grandma, daughter, sister, and friend Joan Mae (Regner) Bitz, age 60, has passed from this life to be with her Eternal Father. Joan died Wednesday, December 23, 2009 surrounded by loved ones at her home after a courageous and valiant battle against pancreatic cancer. Throughout her fight against this disease, she continuously amazed her doctors with her strength, courage, and sense of humor. Joan was born to Arnold “Hap” and Leona (Becker) Regner on May 1, 1949 at their home near Burnstad, North Dakota. She was raised on her family farm near Burnstad and attended schools in Burnstad and Napoleon, North Dakota. She graduated in 1967 from Napoleon High School. As a child, she loved playing with the family dogs and running with them up the hills and through the pastures. This is where her love of nature blossomed. Joan graduated from Wahpeton State School of Science with a degree in medical records in 1968. She began work at Fargo Clinic (Merit Care) and later at the Professional Building in Fargo. In 1969, Joan married Alex Bitz at St. Clare’s church in Burnstad, North Dakota. They had their first son, Brian, in 1970. In 1975, they moved to Valley City, North Dakota. She gave birth to twins Donna and David in the spring of 1976. In Valley City, Joan worked for many years at the Parks & Recreation Department and for Bitz Tire & Service. Joan had a passion for life. She loved laughing, dancing, and having fun anywhere with her friends and family. Joan loved being out in nature. One of her hobbies was gardening, as she was continuously digging up new spots in the yard for flower gardens. She especially loved picking crocuses in the spring and delivering surprise bouquets to family and friends. Joan was a very generous person. She put others in front of herself and always her family first. Joan loved watching her son David play and coach basketball. She enjoyed following his games and continued up until her last days. Joan was also proud of her little monkey shines; her four precious grandchildren, Gabby and Andie Sandman and Adam and Grace Bitz. She was the fun grandma who fed the kids ice-cream for breakfast and taught them to catch frogs and explore nature. Joan never ran out of creative ideas to entertain her grandchildren. They will forever be filled with loving memories of their Grandma Joan and Grandma Bitzy. Joan is survived by her husband Alex; mother Leona Regner of Valley City, son Brian (Melissa) Bitz of Valley City, daughter Donna (Kurt) Sandman of Moorhead, MN, and son David (Stacy) Bitz of Devils Lake, ND; four grandchildren, Gabby and Andie Sandman of Moorhead; and Adam and Grace Bitz of Valley City; a sister Jane (Don) Lemnus of Valley City, brothers Jerry (Alice) Regner of Burnstad, ND, Dale (Susan) Regner of Ypsilanti, Michigan, Bill Regner of Napoleon, ND, Tom (Linda) Regner of Wishek, ND. She was preceded in death by her father Arnold Regner, brother Arnold Regner Jr., sister-in-law Shirley Regner and infant sister Susan Marie Regner.

Our beloved wife, mom, grandma, daughter, sister, and friend Joan Mae (Regner) Bitz, age 60, has passed from this life to be with her Eternal Father. Joan died Wednesday, December 23, 2009 surrounded by loved ones at her home after a courageous... View Obituary & Service Information

The family of Joan Bitz created this Life Tributes page to make it easy to share your memories.

Send flowers to the Bitz family.