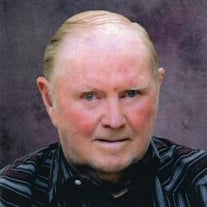 The funeral service for Jim Henderson, 80, McVille, North Dakota formerly of Oriska, North Dakota will be 1 pm Wednesday, October 27, 2021 at Baldwin Presbyterian Church, Pillsbury, North Dakota. A time of gathering will be 6 pm Tuesday at the Oliver-Nathan Funeral Chapel, Valley City, North Dakota with a prayer service at 7 pm. Burial will be in Hillside Cemetery, Valley City. He passed away Saturday, October 23, at Nelson County Health System Care Center, McVille, where he had been a resident for four and a half years. The funeral service will be live streamed at https://vimeo.com/638735144 Jim was born on April 29, 1941 on the family farm in Minnie Lake Township, Barnes County, North Dakota. He was the son of John and Ruth (Earles) Henderson. Jim attended Little Minnie Lake School and then Pillsbury High School for one year. The family moved to Noltimier Township where they purchased the Noltimier farm. Jim then attended and graduated from Noltimier School in 1960. He worked at the Peak Elevator and also farmed with his father. In 1966, he began farming fulltime. Jim moved to his uncles Henry and William Henderson’s farm in Minnie Lake Township when they retired in 1970. Jim enjoyed roller skating and met his future wife, Marilyn Brooks, in Valley City at a skate night. They were united in marriage on September 22, 1973 in McVille. They continued to farm and raised their four children Aaron, Jesse, Elaine and Ward. Jim was a member of Baldwin Presbyterian Church, a supervisor of Minnie Lake Township for over 30 years and served on the board of directors for the Hi-Line Farmers Union Grain Elevator of Peak, North Dakota, for several years. He was preceded in death by his parents. Jim is survived by his wife Marilyn, Page, North Dakota; sons Aaron Henderson, Oriska, Jesse (Suzie) Henderson, Mapleton, ND, Ward Henderson, Oriska; a daughter, Elaine Henderson (George Pilgram), Ayr, North Dakota; a brother, Gary (Silvyne) Henderson, St. Helena, California; a sister June (Wendell) Finkbeiner, Albuquerque, New Mexico; and several nieces and nephews. Funeral arrangements have been entrusted to the care of Oliver-Nathan Funeral Chapel. An online guest book is available at www.olivernathanchapel.com.

The family of Jim Henderson created this Life Tributes page to make it easy to share your memories.

Send flowers to the Henderson family.