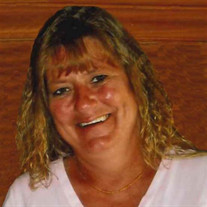 The memorial service for Jeanine Haugen, 49, Fargo, North Dakota, will be 2 pm Friday, January 22, 2016, at Oliver-Nathan Funeral Chapel, Valley City, North Dakota. Inurnment will be later in the spring at Luverne Cemetery, Luverne, North Dakota. She died Monday, January 18, 2016 at Essentia Health after a long, courageous battle with lung disease. Visitation will be one hour before the service at the chapel. Jeanine Marie Haugen was born April 10, 1966 in Cooperstown, ND, the daughter of Melford and Delores (Kmetz) Haugen. She attended school in Hannaford and Cooperstown, ND and Motley, MN. She graduated from Woodrow Wilson School in Fargo. She lived in East Grand Forks, MN and she worked for New Flyer Bus Company in Crookston, MN. She then moved to Fargo where she worked as a housekeeping supervisor for Kelley Inn. She later acquired her CDL and drove gravel and beet truck. Her family was very important to her, her grandson was her sunshine. She loved the outdoors and her pets, her dog, Baby and her cats, Oscar and Otis. She also had two pets that passed away, a dog, Bud and a cat, Sam. She is survived by her long time companion, Randy Mondor, Fargo; a daughter, Trina Motschenbacher, Fargo; a grandson, Taycion Motschenbacher, Fargo; two brothers, John (Cammy) Haugen, East Grand Forks, James Haugen (Lorna Thronsedt) Grand Forks, ND; a sister, Janell (Ron) Kunze, Rogers, ND; nieces, Jenna (Dusty) Amann, and Kaitlyn Haugen; nephews, Justin Barclay, Joey Haugen and Jordan Haugen; a great niece and a great nephew, Rylee and Carson Amann; and her step father, Clarence (Fox) Juhnke, Fort Ransom, ND. Jeanine was preceded in death by her parents. Funeral arrangements have been entrusted to the Oliver-Nathan Funeral Chapel, Valley City. An online guestbook for Jeanine is available at www.oliver-nathanchapel.com

The family of Jeanine Marie Haugen created this Life Tributes page to make it easy to share your memories.

Send flowers to the Haugen family.