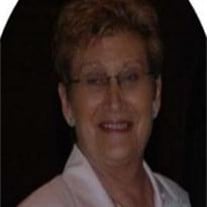 Jeanette Maralyn Loken was born in Valley City, North Dakota on October 3, 1938 to Oscar and Helen (Bruns) Loken at Mercy Hospital. She grew up on the family farm near Oriska before the family moved to Tower City, North Dakota, where the Lokens owned a hardware store. Jeanette graduated from Tower City High School in 1956. She attended Concordia College, Moorhead, MN for two years and went on to UND where she received her Bachelor of Science in Education in 1959. Jeanette was united in marriage to Maynard Satrom on June 14, 1959 at St. Paul’s Lutheran Church, Tower City. They made their home in Grand Forks where she taught in the public schools for two years. The couple moved to Sheridan, Wyoming in 1961, where Maynard was a Manual Arts Therapist. In April 1962, they began farming near Oriska with Jeanette’s parents. They farmed until retiring in December 2011. Jeanette enjoyed spending summers at Lake Ashtabula and winters in Arizona. She also liked to travel and taking the time to play games with her grandchildren. She was an active member of Our Savior’s Lutheran Church, She had served on VCSU V-500 board of directors, and was on the Women’s Division of the North Dakota Winter Show serving as chairman several times, She also had been on the Mercy Hospital Advisory Board. Jeanette served on the North Dakota State Board of Higher Education from 1994- 2001 and also on the NDSU State Board of Agricultural Research and Education. She was preceded in death by a son, James, a daughter, Rachel and a granddaughter, Amanda. Jeanette is survived by her husband, Maynard; her children and grandchildren, John and Amy Satrom, West Fargo and their family, Jared and Katie Satrom, Austin Satrom, Cole and Sophia Satrom; Kristen and Garth Lindgren, Oriska, and their family Katie, Kari and Marie; Andrea and Jon Richman, Oriska, and their family, James, Corby, Sarah and Evan. She is also survived by a sister, Arlyss and Dick Grosz, Erie, Colorado; a niece, Natalie Boyer, Frisco, Colorado; and a nephew, Steve and Liz Grosz, Vienna, Virginia.

Jeanette Maralyn Loken was born in Valley City, North Dakota on October 3, 1938 to Oscar and Helen (Bruns) Loken at Mercy Hospital. She grew up on the family farm near Oriska before the family moved to Tower City, North Dakota, where the Lokens... View Obituary & Service Information

The family of Jeanette Satrom created this Life Tributes page to make it easy to share your memories.

Send flowers to the Satrom family.