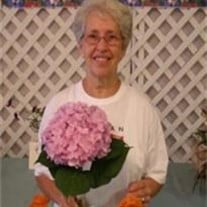 Janet Kay Curley was born on January 7, 1944 to Ella and Ethan Curley. She graduated from Thompson, IA and started working right out of high school. On November 30, 1963, she married John R. Paulson. They made their home in Iowa for 9 years before moving to North Dakota. They were with a custom combining crew that came to North Dakota and they both fell in love with the beautiful land, so they moved there. She was a homemaker while the children were little and made many meals for the farmers that John worked for. Later on, she worked at Coast to Coast for 6 months. She then worked at Red Owl as the head baker for 3 years…that was her dream job! She loved baking. Later, she worked for the Leevers Super Valu bakery until she started working at VCSU as a custodian. She started out in the student center, then moved on to McCoy dormitory where she became a mother to many girls that loved her. From there she moved to the science building. It was said to be the cleanest building on campus. She worked there for 18 years before retiring in 2009. John and Jan enjoyed being retired together. Jan was a 4-H leader for the Hobart Honeydews club for 12 years. Her hobbies included flower gardening, baking, being outside, spending time with her “other half” as she called him, her husband. She also had a hobby of spoiling her grandchildren. She was friendly, loving, hard working, a friend to many, a devoted wife, mother, and Nana. She will be greatly missed by all. Jan died at Mercy Hospital in Valley City on February 17, 2011. She is survived by her loving husband of 47 years, John; sons, John R. Paulson, Jr. and his girlfriend, Kelly Bowlin of Moorhead, MN and Shawn (Teresa) Paulson of Felton, MN; daughters, Holly (Micheal) Olauson of Valley City and Louetta (David) Hanson of Jordan, MN; grandchildren, John Andrew, Michael,and Alyssa Paulson, Dallas, Austen, Brandon, and Shawna Paulson, Jacob, Chelsey and Braeden Olauson, Hope and Jaden Hanson; brothers, Gene (JoAnn) Curley of Garner, IA and Bob Curley of Waconia, MN; sisters, Rosella Wubben of Thompson, IA, Gwen (Dave) Farrell of Olathe, KS, and Sandi (Bernie) Korsa of Garner, IA; and numerous nieces and nephews. She was preceded in death by her parents.

Janet Kay Curley was born on January 7, 1944 to Ella and Ethan Curley. She graduated from Thompson, IA and started working right out of high school. On November 30, 1963, she married John R. Paulson. They made their home in Iowa for 9 years... View Obituary & Service Information

The family of Janet Paulson created this Life Tributes page to make it easy to share your memories.

Send flowers to the Paulson family.