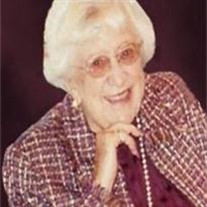 Jane Elizabeth “Betty” (Graves) Paulson, of Valley City, ND, died in the early morning hours of January 2, 2012 at the Cottage assisted living facility in Detroit Lakes, MN. Betty was born June 1, 1913 in Fargo, ND, to her parents, Dr. James Lincoln and Cornelia (Poole) Graves, and was one of three children. Betty married her husband, Hon. William L. “Bill” Paulson of Valley City on September 7, 1938 in South Dakota. Throughout her 98 years, Betty took each opportunity life gave her and ran with it. She taught school in rural North Dakota after graduating college. She lived in New York for a time, trying out for the world-famous Rockettes. She toured Europe extensively. As part of a legal study delegation, she and Bill spent an extended period of time in China, visiting the region and learning about the social and legal aspects of life in the Far East. In her later years, she spent many evenings recording all of her stories and trips in various anthologies to pass on to her family. Betty was an avid golfer, walking 18 holes three times a week. She also enjoyed playing bridge and was a member of Valley City’s bridge club for a time. She was a voracious reader, and would often read several books each week, stating how it kept her mind sharp and occupied. She was a vocal Minnesota Vikings fan and could be heard from a couple of counties away on most Sunday afternoons each autumn as she cheered her team on. Upon Bill’s retirement from the bench in 1983, Betty and he became snowbirds, spending each winter on the white sands of the gulf coast in Destin, FL, returning each spring to their lake home in Detroit Lakes. Throughout her life she was active in multiple social and charitable organizations, including the Eagles, Elks, Shriners and The Open Door Center in Valley City. Betty is survived by her son, Hon. John T. “Jack” (Bonita) Paulson, and daughter, Mary (Mikal) Simonson, both of Valley City. She is also survived by four grandchildren, Amita (Anthony) Perruzzo of Brooklyn Park, MN, Kristofor Paulson of Grand Forks, ND, Nicholas (Angela Sersha) Simonson of Marshall, MN, and Benjamin Simonson of Valley City. Betty was preceded in death by her parents, her brother Jack Graves, her sister Helen Graves-Welles, her husband Bill, and a number of beloved dogs, including the rambunctious Chesapeake Bay Retriever, Oscar, the gentle Irish Setter, Laddie, and the crotchety - yet adored - Chinese Pug, Otis.

The family of Jane "Betty" Paulson created this Life Tributes page to make it easy to share your memories.

Send flowers to the Paulson family.