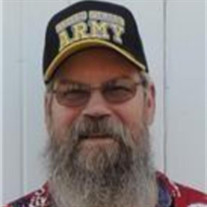 James (Jim) Kent Nelson, age 64, of Dilworth, MN, formerly of Kathryn ND, passed away on December 29th at his residence of natural causes. Jim was born to Walter Vernon Nelson and Dorothy Irene (Ekern) Nelson on August 29th, 1957. He was the fifth child of six. He was baptized and confirmed at St. Paul's Lutheran Church of Kathryn. He graduated from Kathryn High School in 1975 and served in the US Army from 1975 to 1978 where he learned his lifelong trade of welding. He did most of his service in Fort Lewis, Washington. He was married three times and had one daughter, Savannah Jo Johnson (Nelson) from his first marriage. He was a professional welder working in Beulah, ND and New Hampshire for 25 years. He was self-employed and operated his business, JC Welding. He was a steel builder and earned contracts for buildings, including Walmart Stores. He also received a patent for his welded ice chippers and created many of them. He was very proud of being a veteran and an American. His favorite colors were red, white, and blue. He was a bare back rider and participated in the ND high school champion rodeo in 1975, while in the service and back in Fort Ransom, ND. He enjoyed country music, especially Chris LeDoux. He loved Ford trucks and he liked to talk about his younger days of rodeoing, but mostly liked to talk. His mom said he should have been an auctioneer or a preacher. In Norwegian he would have been called a "cheft douse", translated as "a talker". Sometimes being a wild flare, he had his share of troubles. But he called his sister every day for the last two years just to check in. They enjoyed some trips together, including his wish to see the Peace Gardens last summer. He walked his neighborhood every day, enjoying his visits with the local store clerks. He also enjoyed making pies, especially strawberry-rhubarb. Jim is survived by his very much-loved daughter Savannah Jo (Benjamin) Johnson and three grandchildren, Arabelle, Beckham and Remi; four siblings, Virginia (Gini) (Jim) Stevens, Sharon (Dennis) Coleman, Connie (Rodney) Olson and Wayne (Sandy) Nelson; one uncle, Marvin Nelson and numerous cousins, nieces and nephews. He was preceded in death by his parents, Walter and Dorothy Nelson and youngest brother, Jeffrey Dale Nelson. His burial will take place on Friday, January 7th at the Fargo National Cemetery. A memorial service will tentatively be held on May 14th in Valley City at Oliver Nathan Funeral Home. Funeral arrangements are pending at Oliver-Nathan Funeral Chapel, Valley City, North Dakota. An online guestbook is available at www.oliver-nathanchapel.com

James (Jim) Kent Nelson, age 64, of Dilworth, MN, formerly of Kathryn ND, passed away on December 29th at his residence of natural causes. Jim was born to Walter Vernon Nelson and Dorothy Irene (Ekern) Nelson on August 29th, 1957. He was the... View Obituary & Service Information

The family of James Kent Nelson created this Life Tributes page to make it easy to share your memories.