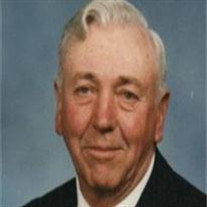 James Eugene Marshall was born on July 28, 1925 to John and Lena (Noeske) Marshall. He was born on the farm his grandfather homesteaded near Oriska, ND in Barnes County. He attended the Noltimier Consolidated School and graduated in 1943. When his father retired from farming in 1946, James took over the farm. In 1955, he married Leona Lux from Verona, ND. They made their home on the family farm where he spent his whole life. He was a member of Epworth United Methodist Church in Valley City and had been a member of Salem United Methodist and served on the board there. He also served on the Hillside Cemetery Board as the President. James was a very community minded and involved man. He was a 4H Leader for 26 years and had been the Barnes County Farm Bureau Director. He was a member of the Eagles Lodge Arie #2192 and had been on the Oriska School Board. Farming and livestock were a big part of his life. He was a member of various organizations including, the Lamb and Wool Producers Association, the ND Farm Bureau Livestock Advisory Board, the ND Sheep Breeders Association, and the ND Lamb and Wool Producers. He was a Director and President of the Columbia Sheep Breeders of America. In 1979, he was awarded the NDSU Saddle and Sirloin Agriculturist of the Year. In 1985, he was honored with the Silver Bell Award from the Columbia Sheep Breeders and was also named their Sheepman of the Year. He was preceded in death by his parents; a son, Gregory Paul; a brother, John Marshall, Jr.; and two sisters, Helen Hill and Amanda Marshall. James is survived by his wife of 55 years, Leona; sons, Jim Jr. of Oriska, Lee (Terri) and Jay (Lori) both of Valley City, Rob (Rhonda) of Oriska, and Curt (Christine) of Valley City; a daughter, Janice (Lee) Beattie of Neche, ND; 9 grandchildren; a great granddaughter; a sister, Mildred Schroeder; and numerous brothers-in-law, sisters-in-law, nieces, nephews, and cousins. He died at his home on October 12, 2010.

James Eugene Marshall was born on July 28, 1925 to John and Lena (Noeske) Marshall. He was born on the farm his grandfather homesteaded near Oriska, ND in Barnes County. He attended the Noltimier Consolidated School and graduated in 1943.... View Obituary & Service Information

The family of James Marshall created this Life Tributes page to make it easy to share your memories.

Send flowers to the Marshall family.