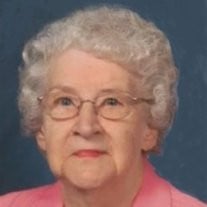 Isabelle Pederson, 88, Valley City, ND died Thursday, September 19, 2013 at Mercy Hospital, Valley City, surrounded by her family. Isabelle Doris Bous was born November 7, 1924 at Long Prairie, MN, the eldest of seven children born to Gladys (Reinbold) and Joseph Bous. She grew up on the family farm, and graduated from Long Prairie High School in 1942. She graduated from Mercy Hospital (Valley City, ND) School of Nursing in 1948 as a Registered Nurse. She was united in marriage to Clayton Pederson November 17, 1951 in Valley City. She worked at Mercy Hospital for several years as a supervisor and surgical nurse, and then devoted her time to raising their family, working side-by-side with Clayton on their dairy farm. In 1974, she returned to work at Sheyenne Care Center, retiring in 1987. Known for “running a tight ship”, she was admired by her co-workers and staff for her willingness to assist with any task. The patient was always first. Isabelle was a 4-H Leader and very active in Marsh Homemakers Club and Beta Sigma Phi Sorority. As a Mercy Hospital Alumni, she and Clayton treasured the longtime friendships of this close-knit group. She served on the Board of Directors of the Open Door Center for many years, and was instrumental in its growth in the community. She was an active member of Faith Lutheran Church and had a lovely singing voice. She enjoyed baking, entertaining family and friends, sewing, doing cross-stitch, jigsaw and cross word puzzles, and reading. She was a great cook and made uncountable batches of K-bars and cookies. She enjoyed growing geraniums year round. She was a wonderful person, wife, mother, grandmother, neighbor and friend, and will be greatly missed. Isabelle is survived by her husband, Clayton; son, Dennis and Gail, Valley City; daughters Diane and Alvin Wald, Berlin, ND and Sam, Valley City; grandsons, Evan Pederson and fiancé Alexandra Wilson, Palmer, AK, Blaine and Katie Pederson, Belgrade, Mt, Marshall Pederson, Jesse Wald, Jason and Abby Wald, Dylan and Rachel Wald; great-granddaughter, Toni Wald; brother, Robert and Madella Bous; sisters, Leona Smith, Wilma Finseth, Ginny and Jim Arone, Jeanne Bous; sisters-in law, Jean Miller, Valley City, Earline Pederson; and many nieces and nephews. She was preceded in death by an infant sister, Mildred and one brother, Harold Bous. Visitation will be Thursday, September 26, 2013 from 5 – 7 pm at Oliver-Nathan Funeral Chapel, Valley City. Memorial Services will be held on Friday, September 27, 2013 at 2 PM at Faith Lutheran Church, Valley City with Rev. Jolene Knudson-Hanse officiating. Isabelle will be interred at the Veterans Cemetery in Mandan, ND, at a later date. Memorials can be made to the charity of your choice. An online guestbook is available at www.oliver-nathanchapel.com

The family of Isabelle D. Pederson created this Life Tributes page to make it easy to share your memories.