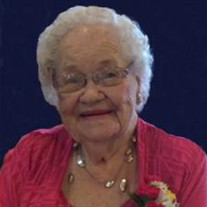 Irene C. Vandrovec, 104, Valley City, North Dakota passed away on Friday, December 7, 2018 at the Sheyenne Care Center in Valley City. Irene C. Jorgenson was born on September 2, 1914 in Valley City, North Dakota to Rudolph and Ida (Johnson) Jorgenson. She grew up and attended schools in Valley City and graduated from the Normal High School. She married Anton (Tony) Vandrovec on September 18, 1937, in Valley City, where they made their lifetime home. She was a member of St. Catherine’s Catholic Church, Division 2 ladies aid, and the Noltemier Homemakers. Irene and Tony, along with several other parents, were instrumental in starting the original Open Door Center in Valley City. She enjoyed flowers, cooking, gardening, canning and reading books from the library. She was a very loving and devoted person to her family, especially in the care of her handicapped daughter, Ann. At the age of 97, she moved to the Legacy Place where she continued to make many new friends. Irene is survived by four sons and three daughters, Eugene (Alicia), Alexandria, Virginia, Robert (Marlys), Nacogdoches, Texas, Michael (Kathy), Fargo, North Dakota, Ann Vandrovec, Valley City, Jane (Tim) Kelley, Cottage Grove, Minnesota, Linda (Bob) Retterath, Green Bay, Wisconsin, and Neil (Jill), Valley City. She is also survived by a daughter-in-law, Beverly Vandrovec, Fargo; 14 grandchildren and 23 great grandchildren. She was preceded in death by her parents; siblings, Richard Jorgenson and Myrtle Schaper and two infant brothers; husband, Tony; son, Ronald and great grandson Tate Warpinski. A funeral mass will be celebrated 11 am Monday, December 17, at St. Catherine’s Catholic Church, Valley City. Visitation will be 5 – 7 pm Sunday, December 16, at the Oliver-Nathan Funeral Chapel, Valley City, with the rosary at 6:30pm followed by a prayer service at 7 pm. Visitation will continue one hour before the service at the church. Funeral arrangements have been entrusted to the care of the Oliver-Nathan Funeral Chapel. An online guestbook is available at www.oliver-nathanchapel.com

The family of Irene C. Vandrovec created this Life Tributes page to make it easy to share your memories.

Send flowers to the Vandrovec family.