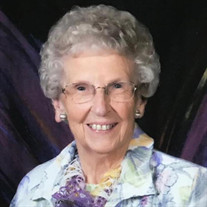 Irene's funeral service will be live streamed via Faith Lutheran Church Valley City Facebook. God welcomed Irene Agnes Haugen with open arms on September 6, 2020. She passed away peacefully in her sleep on the farm in Dazey, ND. She was born on November 7, 1924 to Tony and Lena (Larson) Syvertson. She had six sisters and one brother, Lillian (Nels) Jorgenson, Sylvia (Conrad) Fogderud, Ruth (Ingvard) Haugen, Ervin Syvertson, Elizabeth (Andrew) Bouck all of which preceded her in death. Viola (Glenn) Medd, Portland, Oregon and Inez (El) Hopewell, Lakeside, California both are still with us. Irene went to Valley City, ND by herself at age 12 to attend school. She achieved her teaching certificate in 1942, teaching for two years at Reidman School where some of the students were her same age. She married Carl J.L. Haugen on July 22, 1945, who was known as the man in the brown suit from the dances in Dazey. They had four children, Raymond Haugen (Wanda), Caroyle Brown (Tim), Tony Haugen (Cory), and Darlene Harris (Tom Hamm). She is also survived by 13 grandchildren, Terry Haugen (Patty), Jason Haugen (Rochelle), Arin Brown, Catherine Scherling (Steven), Nicole Tranby (Ryan), Erica Barnett (Justin), Chas Harris (Katy), Wyatt Harris, Crystal Nelson (Kyle), Rhonda Dahl (Lee), Richard Zink (Tisha), Renita Quam, Randall Zink (Amanda); and 33 great grandchildren. Irene was always busy. She worked on the farm beside her husband, raising children, was an excellent seamstress and baker. She was a founder of the Farmers Market in Valley City. She was involved in the craft business, cooking, church, volunteering at Medora and traveling. Carl passed away in April 2001. Irene continued to live at the farm and also bought a condo in Valley City. She continued her craft business selling, sewing, embroidery, crocheting, quilts, and baking. Irene was known as “the donut lady.” Irene loved to travel. She returned to Norway to visit relatives, went on a Mediterranean, Mexico, and Caribbean Cruise along with traveling many places in the United States. Irene enjoyed big birthday parties and had many friends and relatives that she was close to. Irene will live in the hearts and minds of those who loved her forever. Visitation will be held from 5:00 pm to 7:00 pm, Thursday, September 10 at Faith Lutheran Church, Valley City. The funeral service will be 10:00 am, Friday, September 11 at Faith Lutheran Church, Valley City with visitation one hour prior to the funeral service. Burial will be in St. Olaf Cemetery, Walum, ND. Funeral arrangements have been entrusted to the care of the Oliver-Nathan Funeral Chapel, Valley City. An online guestbook is available at www.oliver-nathanchapel.com

Irene's funeral service will be live streamed via Faith Lutheran Church Valley City Facebook. God welcomed Irene Agnes Haugen with open arms on September 6, 2020. She passed away peacefully in her sleep on the farm in Dazey, ND. She... View Obituary & Service Information

The family of Irene Agnes Haugen created this Life Tributes page to make it easy to share your memories.

Irene&#39;s funeral service will be live streamed via Faith Lutheran...

Send flowers to the Haugen family.