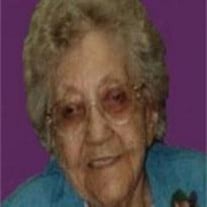 Irene Augusta Abrahamson was born November 25, 1917 at Cooperstown, North Dakota, the daughter of Herbert and Auguste (Schulz) Steinborn. She received her education at Helena No. 3 school, Griggs County. In 1936, they moved to Edgeley, North Dakota. She began working as a housekeeper in 1939. On January 29, 1942, she was united in marriage to Arthur Abrahamson of Leal, North Dakota. They made their home near Leal where they farmed. Irene worked at the Leal School for five years as the Head Cook before going to the North Central school in 1963 and worked there as the baker for the Hot Lunch. She retired from there in 1971. They retired from farming in 1979, but continued to live on the farm until Art’s death in January 1983. Irene moved into a condo in Valley City, and remained there until entering the Sheyenne Care Center on November 4, 2005. She died there on November 5, 2010. She was a member of St. Paul’s Lutheran Church, Wimbledon, North Dakota, where she had been a Sunday School teacher for many years. She became a member of Our Savior’s Lutheran Church after moving to Valley City. Irene enjoyed fishing, gardening, baking (especially home-made bread), crocheting, and playing whist with her family and friends. She especially enjoyed spending time with her grandchildren. She was very avid about keeping up her diaries, and wrote in them for 67 years. She is survived by her two daughters, Faye (Jeff) Bates of Douglasville, Georgia and Shirley (Richard) Herberg of Gardner, North Dakota; two brothers, Harold (Lois) Steinborn of Kent, Washington and Harvey Steinborn of Sioux City, Iowa; one granddaughter Sheri Burton of Marietta, Georgia; two grandsons, Matthew and Joshua Herberg, both of Fargo, North Dakota and four great grandchildren. Irene was preceded in death by her parents, husband, Art; three sisters, Genevieve (John) Greenwald, Isabel (Dean) Volkman, Jeanette (John) Schaffer.

Irene Augusta Abrahamson was born November 25, 1917 at Cooperstown, North Dakota, the daughter of Herbert and Auguste (Schulz) Steinborn. She received her education at Helena No. 3 school, Griggs County. In 1936, they moved to Edgeley, North... View Obituary & Service Information

The family of Irene Abrahamson created this Life Tributes page to make it easy to share your memories.

Send flowers to the Abrahamson family.