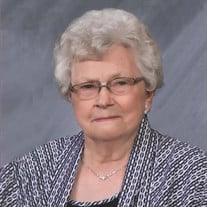 Inez Lorraine (Ronning) Eggert was born on November 21, 1930 in Jamestown, ND, the daughter of Helge and Stella (Anderson) Ronning. Early in her years she spent time on their family farm attending various country schools near Ypsilanti, ND. After graduating from Jamestown High School in 1948, she worked as a secretary for the junior and senior high school In Jamestown. In 1950, Inez moved to Valley City, ND to work as deputy city auditor for the City of Valley City. In the summer of 1950, Inez met the love of her life Robert Eggert while roller-skating. They were united in marriage March 30, 1952 in Valley City. During their 69 years of marriage, they worked side by side on the family farm thirteen miles north of Valley City. Inez was homemaker, caretaker, helping raise small grains, cattle, and had very large garden! Inez was very active in 4-H, homemakers, and circle. On any given night of the week, you would find Bob and Inez square, round, and ballroom dancing. In 2007 they moved off the family farm into Valley City, where she was very active watching her grandchildren and great-grandchildren in all their activities and quilting at the church, with the ladies that she adored. On Tuesday, June 29th she passed away peacefully with her husband by her side at Mercy Hospital, Valley City. Inez is survived by her loving husband, Robert Eggert of 69 years; her daughter Mary Lynn (Terry) Franklin and her grandson Michael; her son Wayne (Debbie) Eggert, grandson Rob (Jamie) Eggert, and their children Reese & Carver, granddaughter Gina (Jarin) Thornton, their sons Austyn and Jacksyn, granddaughter Tori (Dillon) Nieuwsma, their son Daxsyn and baby N. due in July; her son Dr. Douglas (Michelle), granddaughter McKenzie; her son-in-Law Brian (Melanie) Gion, granddaughter Jennifer Gion and her son Camdyn, grandson Zachary (Stephanie) Gion and their son Brantley; her sister in-law, Alice Jordan and numerous nieces and nephews. Inez was preceded in death by her parents; her daughter Susan Gion; her granddaughter Melissa Eggert and her sisters, Mary Detwiller and Arlene Fowler. Inez will always be remembered for her unwavering love and support, warm personality, and gentle nature. The funeral service will be at 2:00 p.m, Monday, July 5th at Our Savior’s Lutheran Church, Valley City. Visitation will be held 2 hours before the service at the church. Burial will be in Memory Gardens, Valley City. Memorials may be designated to the Our Savior’s Lutheran Church Quilters. Funeral arrangements have been entrusted to the Oliver-Nathan Funeral Chapel, Valley City. An online guestbook is available at www.oliver-nathanchapel.com.

The family of Inez Lorraine Eggert created this Life Tributes page to make it easy to share your memories.

Send flowers to the Eggert family.