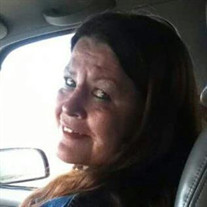 Ida Mae Brant, 59, of Valley City and tribal member of Turtle Mountain Ojibwa Band, passed away Thursday, March 15, 2018 peacefully at home with her loving children and grandchildren by her side. She was born October 19th, 1959 in Cavalier, ND, to Teddy and Lilly (Ouellette) Vondal. She attended school in Fargo, ND throughout her childhood. She married Roland Brant on August 24th, 1979 in Watertown, SD. They made their home in Summit, SD. Roland worked in the construction field, while Ida stayed home with their children. They lived in various communities throughout Minnesota, South Dakota and North Dakota. Ida was a loving mother and grandmother with a beautiful, generous spirit and had a heart of gold. She enjoyed spending time with her grandchildren singing “You are my sunshine”, drinking coffee and listening to the birds. She is survived by her spouse, Roland; children Chantel (Robert) Rucker, Joseph Brant, Lilly Brant, Wade Brant, of Valley City, ND and Ruby Skar, Detroit Lakes, MN. They share 17 grandchildren Mikala, Joseph, Monika, Haylie, Eliza, Ezila, Eddiez, Evan,LeelaWiya Waste, Sahnish, Natalie, Treyson,Mercedys, McKenzie, Darran, Layla and Elizabeth. Also surviving are her sisters Susan (Wayne) Delmore of Sandborn, ND and Linda (Don) Conzemius of Breckenridge, MN and brother John Vondal, East Grand Forks, ND. She was preceded in death by her two infant sons, parents, brothers Terry, Dennis, Gary, Ronnie and sister Patsy Goulet. Many nieces and nephews and special friends. Pallbearers are Joe, Wade, Junior, Eddiez, Bay and Treyson. All of her grandchildren are honorary pallbearers. “ You Can’t Be What You Want To Be Until You Accept What You Are.” by Ida

Ida Mae Brant, 59, of Valley City and tribal member of Turtle Mountain Ojibwa Band, passed away Thursday, March 15, 2018 peacefully at home with her loving children and grandchildren by her side. She was born October 19th, 1959 in Cavalier,... View Obituary & Service Information

The family of Ida Mae Brant created this Life Tributes page to make it easy to share your memories.

Send flowers to the Brant family.