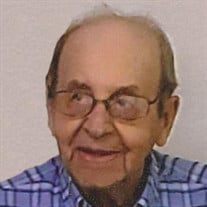 Funeral service may be viewed via livestream at https://vimeo.com/event/1123862 Herb Hoff went home to the Lord peacefully at the age of 95 surrounded by his family at the Sheyenne Care Center, Valley City, on June 30, 2021. Herbert Hoff was born October 21, 1925 in Corson County, South Dakota near McLaughlin. He was the son of Christ and Eva (Hertel) Hoff, the seventh of 13 children. Herb lived with his parents on various farms in North and South Dakota. He worked on the family farm and helping other farmers. Herb entered the United States Army on Valentine’s Day 1946 and was honorably discharge in 1947. After returning, he worked as a farm hand, before going to work for Farmers Union in April 1949. On June 12, 1949, he married Gertude Larson in Valley City, where they made their home. Herb and Gert had three daughters, Sharon, Julie and Bonnie. In 1960, Herb opened his own business “Herb’s Service” at the corner of 3rd Street and 2nd Avenue NE, across the street from the post office. The first 18 ½ years it was Valley City Texaco, then Exxon, then Fina and the last year he handled Conco products. Herb had been in the gas business for 41 ½ years and in 1990, he retired. His favorite pastime was bowling, which he won many awards. He also enjoyed horseshoes and dancing. Herb was a member of the VFW, Eagles and Trinity Lutheran Church. Herb is survived by his daughter Julie (Jerry) Yokom, Valley City, and their family, Angie (Todd) Reed, and their children Haley, Brooke, Noah and Kelley; Jerrod (Lisa) Yokom and their children, Jordon, Brenna, Tayla, Jocelyn and Jaymeson; Tyler Yokom and son Jaxon; and great great grandsons Miloh and Hudson; and his daughter Bonnie (Jim) Gordon, Valley City and their family, Austin (Nicole) Gordon, and their children MaKayla, Lexxys and Seth; Tony (Katie) Gordon and their children Christian and Allie. Herb is also survived by his brother Howard Hoff, Billings, Montana and his sister Alvera Sturm, Sun City, Arizona and many nieces and nephews. He was preceded in death by his wife, Gert and daughter Sharon Hoff; seven brothers and four sisters. Herb was a great husband, dad and friend to many and truly will be missed. The funeral service will be 2 pm Tuesday, July 6, 2021 at Trinity Lutheran Church, Valley City. Visitation will be 5-7 pm Monday at the Oliver-Nathan Funeral Chapel, Valley City and will continue one hour before the service at the church. Burial will be in Memory Gardens, Valley City. Funeral arrangements have been entrusted to the care of the Oliver-Nathan Funeral Chapel. An online guestbook is available at www.oliver-nathanchapel.com

Funeral service may be viewed via livestream at https://vimeo.com/event/1123862 Herb Hoff went home to the Lord peacefully at the age of 95 surrounded by his family at the Sheyenne Care Center, Valley City, on June 30, 2021. Herbert Hoff was... View Obituary & Service Information

The family of Herbert Hoff created this Life Tributes page to make it easy to share your memories.

Funeral service may be viewed via livestream at https://vimeo.com/event/1123862

Send flowers to the Hoff family.