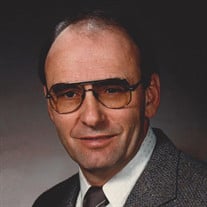 Henry “Hank” Fred Bruns died on Monday, June 14, 2021. Hank was born October 10, 1940 in Valley City to Henry T and Katie Bruns. He attended school at Noltimier consolidated school until his junior year in 1957 and then he graduated from Valley City High School in 1958. He attended Valley City State for a time and took Ag short courses at NDSU during the winter months while he farmed with his father. Hank married Sandra Meyer on September 29, 1962 in Valley City. They made their home on his family farm in Oriska, ND where they lived until September 2000 when they moved south of Valley City. They had two sons, Henry Wade and Dain Evan. Hank served on many boards including Noltimier Township, church of the Nazarene board, rural fire department board, Farmers and Merchants Bank board and the Evergreen Co-op board. Hank’s relationship to Jesus Christ was a real part of his life. It wasn’t a religion that he did, it was a relationship that changed him from the inside out. Jesus reprioritized his life at the age of 33 while he was just a “farmer”, his life impacted not only his immediate and extended family, but countless others around the world as demonstrated by his acts of love and service and generosity. Hank knew that nothing God blessed him with was his own, but God’s. He wanted to honor God by being a good steward. That desire is why so many lives and organizations were blessed and impacted by his generosity. Hank’s deep desire was for everyone he encountered to know the love of Jesus. It was his greatest driving force for all to have a personal relationship with Jesus. Hank knew that we are all sinners in need of a Savior. He understood that the Bible says that there is only one way to the Father and that was through Jesus Christ and His shed blood on the cross and His rising again three days later. Hank wanted all to have the free gift of eternal life that Jesus offers by surrendering our lives to Him. He knew the freedom, love, grace and mercy that Jesus offers and wanted all to know and have that as well. Hank lived a life that reflected His Lord and Savior. Jesus flowed thru him in all that he did. Hank was a humble man. He impacted so many lives, but mostly his family. They watched him model true humility. Hank’s love for his grandkids was so personal and impactful. He never missed an opportunity to call and tell them how much he loved them and how proud he was of them. He would always tell you he was praying for you, and you knew he meant it. We know Hank is in heaven meeting all the people he impacted with his generosity and sharing the gospel. He has been welcomed Home and heard, well done good and faithful servant. Hank is survived by his wife, Sandra in Valley City; his sons Wade, and wife Kimberly of Oriska, Dain, and wife Natasha of Ohio; his four grandchildren, Michael, his wife Jerri of Virginia, Nicholas, his wife Nicole of Jamestown, Dalen and Owen, of Ohio and his three great grandchildren, Lucy, Raegan and Eli. Hank is also survived by his sister Shirley and her husband Ted Mahaffey of North Carolina; his brother-in-law Randie and wife Katie Meyer of Valley City; his sister-in-laws Marcie and husband Dean Weimer of Minnesota and his sister-in-law Bonnie Grafing of Valley City, as well as several nephews and nieces. Hank lost his sister Kay Winter on June 15, 2021. Hank was preceded in death by his parents Henry T. and Katie Bruns. The funeral service will be 2 pm Saturday June 19, 2021 at Connect Church, 320 Central Avenue South, Valley City, North Dakota. Visitation will be at the church from 5-7:30 pm Friday with a prayer service at 7:30 pm. Visitation will continue one hour before the service. Burial will be at Hillside Cemetery, Valley City. The live stream service will be available at https://vimeo.com/563380568 Funeral arrangements have been entrusted to the care of the Oliver-Nathan Funeral Chapel, Valley City. An online guestbook is available at www.oliver-nathanchapel.com

The family of Henry "Hank" Bruns created this Life Tributes page to make it easy to share your memories.

Send flowers to the Bruns family.