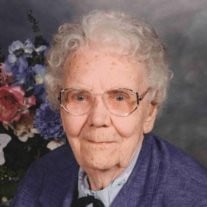 The funeral service for Henrietta I. Dotting, 107, Valley City, ND, will be 2:00 P.M., Saturday, July 20, 2013 at Trinity Lutheran Church, Valley City. Burial will be in Memory Gardens, near Valley City. Visitation will be on Friday from 4:00-7:00 p.m. at the Oliver-Nathan Funeral Chapel with a prayer service beginning at 7:00. Visitation will continue an hour prior to the service at the church on Saturday. On January 4, 1906, Henrietta Ingeborg Rasmusson became the first born child to George and Caroline (Fosmo) Rasmusson. She was born in Dazey, ND. Her baptism took place in Rush River Lutheran Church near Martell, WI and she was confirmed at Our Saviour’s Lutheran Church, Dazey. Henrietta grew up in Dazey and graduated in 1923. She attended Valley City Teacher’s College, earning her Standard Certificate. Henrietta taught in Barnes County at Pierce, Eckelson, and Sanborn Schools. She also taught one year in Sumner, OR. She married William Dotting, August 19, 1941 in the Trinity Lutheran Parsonage in Valley City, ND. The couple farmed in Stewart Township until 1972 when they had an auction sale and rented the land out. They continued to live on the Dotting farm until 1989 when they moved to Valley City. He died on October 11, 1994. She lived at Bridgeview Estates for 15 years before entering the Sheyenne Care Center in February of 2012. Henrietta was a member of various organizations including; Dazey High School, the State Teachers College Alumni Association, Our Savior’s Lutheran Church in Sanborn, Sanborn WELCA, Eastern Star, Valley City Retired Teachers, Pioneer Daughters, and the Barnes County Historical Association. She also served on many boards around the area including; The Stewart District School Board, The North Central School Board in Barnes County, The Barnes County Welfare Board, and the Association for Retarded Citizens Board. Mrs. Dotting is a past Worthy Matron of the Eastern Star, and was the organist and treasurer at Our Savior’s Lutheran. She also taught Sunday School for many years. Most currently she was a member of Trinity Lutheran Church in Valley City where she taught Bible School. Henrietta died at the Sheyenne Care Center on July 15, 2013. She is survived by many nieces and nephews. She was preceded in death by her husband; three brothers, Robert, Paul, and Howard; and two sisters, Helen Bender and Margaret Rasmusson. Arrangements for Henrietta have been entrusted to the Oliver-Nathan Funeral Chapel, Valley City. An online guestbook is available at www.oliver-nathanchapel.com

The funeral service for Henrietta I. Dotting, 107, Valley City, ND, will be 2:00 P.M., Saturday, July 20, 2013 at Trinity Lutheran Church, Valley City. Burial will be in Memory Gardens, near Valley City. Visitation will be on Friday from... View Obituary & Service Information

The family of Henrietta Dotting created this Life Tributes page to make it easy to share your memories.

The funeral service for Henrietta I. Dotting, 107, Valley City,...

Send flowers to the Dotting family.