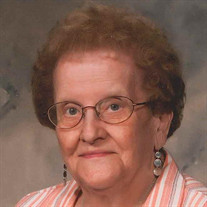 The funeral service for Helena Bubach, 95, Valley City, North Dakota formerly of Litchville, North Dakota will be 10:30 am Thursday, January 18, 2018 at Trinity Lutheran Church, rural Litchville. Visitation will be 4-6 pm Wednesday at the Oliver-Nathan Funeral Chapel with a prayer service at 6 pm. Visitation will continue one hour before the service at the church. Burial will be in the spring in Trinity Cemetery. Helena Martha Schulz was born on March 12, 1922 to Edwin and Clara (Gramita) Schulz at Oakes, ND. Helena was baptized on March 17, 1992 in her parent’s home. On June 3, 1941, Helena graduated from LaMoure, ND. She was preparing to go to New York to be a nanny, but in the meantime shewent to Grand Rapids for a dance where she met her future husband. Helena married George Bubach at Trinity Lutheran Church at LaMoure, ND on June 28, 1942. George and Helena were well known for all the crafts they made over the years. They were never board. Helena was always interested in making something out of any kind of string. Over the last several years, Helena’s passion was Brazilian Embroidery. She loved the challenge. Helena was also a good cook at home and at school. She cooked at the Litchville Public School from 1968 to 1986. Helena passed away on January 13, 2018 at the Wishek Living Center. She was preceded in death by her parents, husband, twin brother Carl Schulz and brother, Arthur Schulz. Helena is survived by two daughters, Beverly (Michael) Vrahnos, El Paso TX and Georgine (Terry) Sayler, Wishek, ND. Grandchildren Michael (Claudia) Vrahnos, Jr., Charles (Michelle) Vrahnos, Tanya (Kevin) Erickson and Teresa (Friend Jason) Sayler. Great grandchildren Charlize, Jared and Gavin Vrahnos and Hadyn and Ashton Erickson. Funeral arrangements have been entrusted to the care of the Oliver-Nathan Funeral Chapel, Valley City. An online guestbook is available at www.oliver-nathanchapel.com

The family of Helena Bubach created this Life Tributes page to make it easy to share your memories.

Send flowers to the Bubach family.