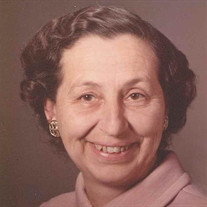 Helen Challey, 98, Fargo ND, formerly of Valley City ND, passed away on Wednesday, September 13, 2017 at Eventide Fargo under the care of Hospice of the Red River Valley. Helen was born on March 14, 1919 in LaMoure ND, the only child of James and Elizabeth (Bryson) Frank. She attended school in LaMoure and graduated from the University of North Dakota. She taught high school in Roseau MN for two years. Helen married Charles Challey in 1944. They lived in LaMoure prior to moving to Valley City in 1947. Together they raised four children, gardened under the Highline Bridge and built a cabin on Upper Cormorant Lake near Lake Park MN. Helen was smart, well-read and engaged. She was a whiz at crossword puzzles. During retirement Charles and Helen spent summers at the lake fishing, gardening and playing spirited games of bridge with family and their dear lake friends. Helen set another place at the table for anyone who happened to be around at mealtime. Charles passed away in 2002. Helen moved to Evergreens Assisted Living in Fargo in 2003 and to Eventide Fargo in 2016. She will be remembered for her kind, generous, patient nature and a quiet sense of humor. Helen is survived by three sons: James (Janet Gray), Poughkeepsie, NY; John (Mary), Fargo ND; David (Connie), Hankinson ND; and one daughter: Lucille (James) Wire, West Fargo ND; also five grandchildren: Darren (Michelle) Challey, Sammamish WA; Charles (Windy) Challey, El Sobrante CA; Elizabeth (Pat) Richard, Fenton MO; Thomas Challey, Fargo ND; Tarah (Dave) Larson, Wahpeton ND; and eight great-grandchildren. She is precededin death by her husband, Charles, and her parents. The family would like to thank the staff at Evergreens, Eventide and Hospice for their loving and compassionate care. In keeping with Helen’s wishes that “nobody make a big fuss,” family graveside services will be held at a later date. Memorials preferred to Hospice of the Red River Valley or the donor’s choice. Private graveside services will be held in Memory Gardens, Valley City. Arrangements are by the Oliver-Nathan Funeral Chapel, Valley City. An online guestbook is available at www.oliver-nathanchapel.com

Helen Challey, 98, Fargo ND, formerly of Valley City ND, passed away on Wednesday, September 13, 2017 at Eventide Fargo under the care of Hospice of the Red River Valley. Helen was born on March 14, 1919 in LaMoure ND, the only child of James... View Obituary & Service Information

The family of Helen Challey created this Life Tributes page to make it easy to share your memories.

Send flowers to the Challey family.