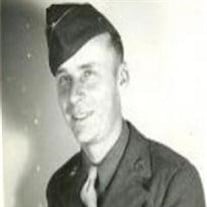 Harold Ludwig Lewis was born June 21, 1918 at Steele, North Dakota, the son of Ludwig and Clara(Zimmerman)Lewis. He was united in marriage to Eleanor Borg on April 12, 1941 in Ventura, California. They made their home in Inglewood, California. Harold worked in aviation before entering the United States Army. While serving his country during World War II, Harol d was awarded various honors including the Bronze Star. Upon his discharge, Harold and Eleanor moved to Valley City. Harold attended Valley City State University and graduated in 1949, with a Teacher's Certificate. During his years of teaching in various schools in Barnes County, Harold touched the lives of many individuals, both with sharing his vast knowledge and his unending sense of humor. Harold especially enjoyed teaching history and art to his students. Still life drawing was also a favorite passtime for him. From 1971 to 1986 Harold continued to serve in the field of education as Barnes County Superentendent, allowing him to visit some of the schools in which he previously taught. His office at the Court House was frequently visited by former students, which he very much welcomed. Upon his retirement, Harold and Eleanor continued to make their home in Valley City. Eleanor passed away January 24, 2004. In May of 2006, Harold moved to Rolling Hills Residence, Barrett, MN, and spent time entertaing staff neighbors and family members. Harold had been a member of Faith Lutheran Church in Valley City, and a member of the Eagles and the VFW. He is survived by his daughter, Suzanne (Steve) Hasbargen, Fergus Falls,MN; his son, David (Debra) Lewis, Glenrock, WY; four grandchildren, Brandon, Jillian, John, & Ginger; five step-grand children, Sarah, Jacob, Jon, Josh, & Stephanie; and five great- grand children; one brother, Donald Lewis, Ashland, OR; & one sister, Mildred Johnston, Reno,NV. Harold was preceeded in death by his wife and parents.

Harold Ludwig Lewis was born June 21, 1918 at Steele, North Dakota, the son of Ludwig and Clara(Zimmerman)Lewis. He was united in marriage to Eleanor Borg on April 12, 1941 in Ventura, California. They made their home in Inglewood, California.... View Obituary & Service Information

The family of Harold Lewis created this Life Tributes page to make it easy to share your memories.

Send flowers to the Lewis family.