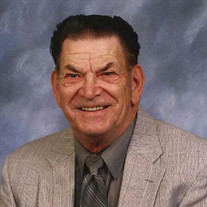 Harold Sydney Erickson, 89, formerly of Litchville, ND passed away peacefully April 25, 2016 at Eventide, Jamestown, ND just short of his 90th birthday. Harold was born April 27, 1926 to Anton and Ellen (Moen) Erickson. He attended country school and married Mavis Lorraine Olson on June 14, 1959 at First Lutheran Church, Litchville. He began as a farmer, milked cows and later did odd jobs for many, the “Community Fix It” man from electrical to plumbing. You name it, he could fix it! Harold and Mavis later purchased the Tasty Treat Drive-in, Litchville. His hobbies included working on small engines, carving gun stocks and other wood carvings. Many are displayed at the Litchville Museum. His first love was gun collecting and repair. He enjoyed his coffee and visiting. He was a member of the Ft. Ransom Crafters Club and was a founder of one of the ND Gun Clubs. He was a baptized and confirmed member of First Lutheran Church. He is survived by one daughter, Rachael (Terry) Carlson, Litchville, one granddaughter, Jami Carlson Rodin, LaMoure, ND; four great grandchildren, Aaron Rodin, Marion ND, Brenna Rodin, Sioux Falls, SD, Alyson and Nateal Rodin, LaMoure, ND; one brother-in-law Clayton Olson, Billings, MT; many nieces and nephews. Harold was preceded in death by his parents, wife, two great granddaughters, brothers’ Ivan, Glenn and Ralph Erickson and sisters’ Alma Lynch and Olga Boom.

The family of Harold S. Erickson created this Life Tributes page to make it easy to share your memories.

Send flowers to the Erickson family.