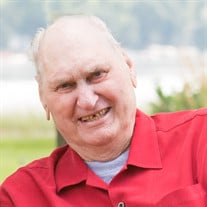 Gregory Dimmer, 86, Valley City, ND died September 5, 2014 in Fargo, ND while in Sanford Health Palliative Care. Mass of Christian Burial will be held at 10:30 AM on Tuesday, September 9, 2014 at St. Catherine Catholic Church, Valley City. Visitation will be held on Monday from 5:00 PM until 7:00 PM at St. Catherine Catholic Church. The Rosary will be prayed beginning at 6:45 with a prayer service following at 7:00. There will also be visitation an hour prior to the service on Tuesday. Gregory Bernard Dimmer was born August 12, 1928 in Fargo, ND to Philip and Rose (Perske) Dimmer. He was baptized and confirmed at St. Henry’s Catholic Church of Alice, ND. Gregory attended school in Alice and Enderlin, ND. He served in the US Marine Corps from 1951-1953. He was at Camp Lejeune, NC during the Korean Conflict where he was an auto mechanic instructor. Upon his discharge he held the rank of Sergeant Meritorious. Before he entered the service, he farmed in the Alice area and returned there after he was discharged from the Marines. On July 21, 1954, he married Harriet Weber at Holy Trinity Catholic Church in Fingal, ND. They farmed in the Fingal area from 1955 until retiring and moving to Valley City, ND. He was a member of Holy Trinity Catholic Church in Fingal for many years and was currently a member of St. Catherine Catholic Church in Valley City. He was a member of various organizations including the Fingal Legion and the Fingal Wildlife Club. He served on the Fingal School Board, the Barnes County School Reorganization Board and the FHA Board. For 22 years, he was on the Holy Trinity Church Board. Gregory loved to travel, seeing all but 4 states and going on trips to Europe. He and Harriet spent many winters in Bullhead City, AZ. He liked going to the casino, playing Bingo (one may say he was a “professional Bingo player”), but most of all he enjoyed spending time with family. He is survived by his wife of 60 years, Harriet; children, Renee (Wayne) Anderson of Casselton, ND, John (Connie) Dimmer of Oriska, ND, Neal (Colleen) Dimmer of Fingal, ND, Darrell (Vicki) Dimmer of West Fargo, ND; 9 grandchildren, Amy (Dave) Fiske of Albertville, MN, Cindy (Jared) Schiers of Draper, UT, Michael (Lacey) Anderson of Davenport, ND, Sarah Anderson of Fargo, ND, John Anderson of Davenport, ND, Jessica (Dustin) Theurer of Valley City, ND, Amanda (Adam) Pilgrim of Casselton, ND, Tedi Dimmer of West Fargo, ND, and Gregory Dimmer of West Fargo, ND; 8 great grandchildren, Riley Fiske, Drew Fiske, Keira Schiers, Dia Schiers, Blake Theurer, Emmry Theurer, Christian Pilgrim, and Kenzington Pilgrim; brothers, Lloyus (Patricia) Dimmer of Fargo, ND and Sylvester of Kyle, TX; and many nieces and nephews. He was preceded in death by his parents, Philip and Rose Dimmer; a granddaughter, Charlene Dimmer; brothers, Virgil, Lawrence, LeRoy, and Donald; and sisters, Irene, Evelyn, LaValle, and Eleanor. Funeral arrangements have been entrusted to Oliver-Nathan Funeral Chapel, Valley City. An online guestbook is available at www.oliver-nathanchapel.com

The family of Gregory Dimmer created this Life Tributes page to make it easy to share your memories.

Send flowers to the Dimmer family.