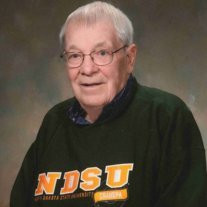 Gordon “Gordy” Marvin Sonsthagen was born September 1, 1926 in Litchville, ND to Albert and Nellie (Michelson) Sonsthagen. He attended grade school at Spring Creek District #24 and high school in Litchville, where he graduated with the class of 1944. Gordon was baptized and confirmed at First Lutheran Church in Litchville. He served in the US Army during World War II in Japan from 1946-1947. On December 26, 1956, Gordon married Frances Sorenson in Moorhead, MN. She passed away February 2, 1987. Gordon farmed on the family farm that was homesteaded by his grandparents, Anton and Oline Sonsthagen. He lived in the Litchville community his entire life. Gordon operated a feeder pig business for over 25 years. In the fall of 1981 through 2002 he ran the Rib Rack Café in Litchville. Gordon married Cleone Charnetzki in 1989. She passed away in 1993. Gordon was very active in his community. Over the years he belonged to many organizations and served on numerous boards including the VFW Post #9315, the Cooties, the Litchville 2000 Committee, the First Lutheran church board, the Litchville Fire Department where he served as chief for many years, the Litchville Farmer’s Union board, the Litchville museum board, and the Valley City Lions club. Gordy was also very active with the Democratic Party. Gordon entered The Legacy Place in Valley City, ND in January of 2012. He passed away on December 31, 2013 at Mercy Hospital in Valley City. Gordon’s greatest joy was driving out to the farm every day to see his family, the crops and the cattle. When he was no longer able to drive, he called several times a day to see how things were going out there. Gordon is survived by his daughter, Shelly and her husband, Dennis Nelson; his granddaughters, Holly and her husband, Tim Johnson, and Tracy Nelson; and a great-grandson, Connor Johnson, all of Litchville; a sister, Betty Quatier of Edmonds, WA; a step-son, Neil Nelson of Odessa, TX; two step-grandsons, Tony Gillihan and Nicholas Nelson; and many nieces and nephews. The staff at The Legacy Place was very special to Gordon and they all took good care of him. He was preceded in death by his parents; grandparents; his wives; his brother, Bernie; and a step-son, Kenneth Nelson. The funeral service, followed by military honors, for Gordon will be held on Monday, January 6, 2014 at 2pm in the Litchville School gymnasium. Burial will be held in the spring at Memory Gardens near Valley City. Visitation will be held on January 5 at Oliver-Nathan Chapel in Valley City from 3pm to 6pm, with a prayer service beginning at 6pm. There will also be visitation at the school an hour prior to the funeral on Monday. An online memorial page and guestbook are available at www.oliver-nathanchapel.com. Oliver-Nathan Funeral Chapel has been entrusted with handling the funeral arrangements for Gordon.

The family of Gordon Sonsthagen created this Life Tributes page to make it easy to share your memories.

Send flowers to the Sonsthagen family.