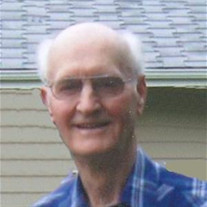 Gordon H. Hannig, age 93, of Valley City, ND died Thursday, July 19 at The Legacy Place, Valley City. Visitation will be 6:30pm Monday, June 23 with a prayer service at 7:00 pm at Oliver-Nathan Funeral Chapel, Valley City. Funeral services will be held 2 pm Tuesday, July 24, at Trinity Lutheran Church, Valley City. Burial will be in Hillside Cemetery, Valley City. Gordon Hannig was born February 20, 1925 in Alta Township near Valley City, the son of Paul and Mary (Priebe) Hannig. He grew up on the family farm and attended Alta rural school and Valley City Public Schools. Following his graduation, he served with the US Navy in the Asian Pacific as a medic with the Marines from 1943-1946. Returning to ND, he held several jobs including working for six years as a heavy equipment operator on the Garrison Dam Project. He was employed by the United States Postal Service for 27 and a half years as a letter carrier in Valley City retiring in 1985. Gordon was a member of many clubs including: flying clubs, music clubs, Veteran of Foreign Wars, VC Eagles, and a member of Trinity Lutheran Church. Survivors include many nieces and nephews. He was the last member of his generation and was preceded in death by his parents, brothers, Harry (Lucille) Hannig, Paul (Marcie) Hannig, Jim (June) Hannig, sisters, Mable (Norbert) Ertelt, and Grace Fisher, his twin sister. Gordon was a licensed pilot and he also enjoyed playing country music with various instruments. After retirement he spent much of his time with his instruments and enjoyed attending fiddling contests as well as thrashing bees – basically anywhere there was country music. When asked about his musical talents, his favorite saying was “I play a little bit of everything, but not much of anything.” He was always shy about playing in front of people. He was everyone’s favorite uncle and will be greatly missed. A time of remembrance for Grace Fisher, Gordon’s twin sister, will immediately follow Gordon’s prayer service.

The family of Gordon H. Hannig created this Life Tributes page to make it easy to share your memories.

Send flowers to the Hannig family.