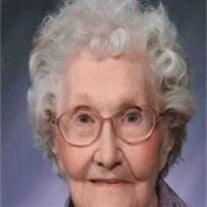 Gloria Elaine Davidson was born October 19, 1924 to Harry and Minnie (Olsberg) Davidson, on a farm near Kathryn, ND. She was baptized and confirmed in the Lutheran faith. She attended school in Kathryn all 12 years. After graduating, she worked for a time at “The Barnes County News”, a weekly newspaper in Valley City, ND, and then returned to help on the farm. In 1945, she married Aaron Ekern at Ft. Ransom, ND. Five boys and a girl were born to this union. The family farm was home until 1981, when Aaron and Gloria moved to Kathryn. He died in 1986. Gloria remained in her little house with the big yard she loved. Gloria was a Sunday School teacher, a member of St. Paul’s WELCA, serving a number of offices there. She was also township and city assessor for 22 years. She worked as a volunteer at the Kathryn Community Store from 1984 until it closed. Her passions were good music, especially the piano-which she taught herself to play; sewing quilts for family and the church; and tending the flowers and the yard-which filled her days until she was no longer able. She loved bird watching, dancing, and playing cards. Gloria pressed her favorite pansies to create framed art. She enjoyed all things about nature, especially watching the seasons change. Gloria died at her daughter's home near Binford, ND on January 9, 2012, under the care of Presentation Hospice. She is survived by five children, Gary (Donna) of Valley City, David of Glenfield, ND, Paul (Mary) of Warren, MN, Loretta (LeRoy) Eggermont of Binford, ND, and Monte (Lillian) of Wahpeton, ND; 11 grandchildren; 12 great grandchildren; several step grandchildren; and many nieces and nephews. She also leaves her special friends in her Tuesday sewing group. She was preceded in death by her parents; husband; son, Richard; an infant sister, Harriet; and two brothers, Omer and Gerald.

Gloria Elaine Davidson was born October 19, 1924 to Harry and Minnie (Olsberg) Davidson, on a farm near Kathryn, ND. She was baptized and confirmed in the Lutheran faith. She attended school in Kathryn all 12 years. After graduating, she... View Obituary & Service Information

The family of Gloria Ekern created this Life Tributes page to make it easy to share your memories.

Send flowers to the Ekern family.