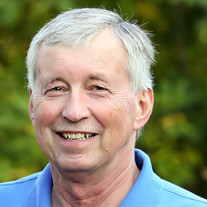 Glen Robert Lysne, Fargo, formerly Oriska, ND, was born on July 11, 1952 in New Rockford, ND to Robert and Helen (Larson) Lysne. He attended Edmunds Public School through third grade and then attended and graduated from Kensal Public School in 1970. Glen attended Valley City State University, graduating in 1973 after double-majoring in Elementary Education and Geography. He began teaching 4th grade at North Central of Barnes and married Jenine Olson on July 27, 1975. In 1976, Glen and Jenine began farming with Jenine’s parents, Archie and Lorraine Olson, and farmed through 1999. In 2000, Glen finished a technology degree at Global Technology Institute in Cooperstown, ND. Glen retired as the parts manager at Rust Sales in 2017, beginning a long journey battling cancer. Glen’s family was his shining glory, loving to attend any activity they participated in. He also enjoyed hunting, music, and was well known for his sense of humor. Glen’s love of Jesus was on display in the way he treated everyone with honesty and integrity. Glen and Jenine raised three children. Amy (Bryant) Kiland, Fargo, Jill Lysne, Hillsboro, ND, and Kurt (Melissa) Lysne, Fargo, and was blessed with eight grandchildren, Halli and Cole Hebl, Koby, Tanner and Makenna Kiland, and Braden, Logan and Emma Lysne. Glen died on November 17, 2019 at home surrounded by family. Glen was preceded in death by his parents and step-father, George Else. He is survived by his wife Jenine, children and grandchildren, his brother Larry (Sheila) Lysne, sisters Susan (Jim) Bond and Jo (Kevin) Lysne Beach, and many nieces and nephews. A prayer service will be held on Friday, November 22 at First Baptist Church in Valley City, ND. Visitation will be from 5 to 7 PM with a time of remembrance at 7:00 PM. The funeral service will be at Calvary United Methodist Church in Fargo at 2:00 PM on Saturday, November 23 with burial at Memory Gardens in Valley City. Funeral arrangements have been entrusted to Oliver-Nathan Funeral Chapel of Valley City. An online guestbook is available at www.oliver-nathanchapel.com. In lieu of flowers, memorials may be directed to the Salvation Army or Christian Worship Hour in Aberdeen, SD. Glen’s family would like to send a sincere thank you to his oncologist at Roger Maris Cancer Center, her nurse, and Hospice of the Red River Valley.

The family of Glen Robert Lysne created this Life Tributes page to make it easy to share your memories.

Send flowers to the Lysne family.