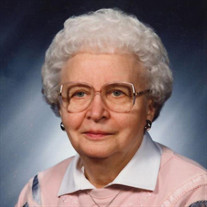 Gladys Marie (Priebe) Ratzlaff, 98, of Valley City, ND passed away June 21, 2020 at the Sheyenne Care Center in Valley City. The funeral service will be 11 am Saturday, June 27, 2020 at Oliver Nathan Funeral Chapel. Visitation will be one hour prior to the funeral service. Gladys was born on April 10, 1922 to Frederick (Fritz) and Viola (Beil) Priebe. She was the oldest of seven children. Gladys and her siblings were raised on a farm in Noltimier Township just north of Valley City. She attended and graduated from Noltimier School where she also enjoyed playing basketball. Gladys worked as a clerk for FW Woolworth and The Fair Store on Main Street in Valley City for eight years. Gladys met her future husband, Edwin Ratzlaff, through her brother and their church. Edwin and Gladys were married on March 14, 1951 in Trinity Lutheran Church, Valley City. After they were married they moved to a farm in Cuba Township just south of Valley City where they raised grain and cattle. Gladys was a hard working farmer’s wife and mother. This union was blessed with one daughter, Mary Ellen. Edwin passed away in January of 1977. Gladys then moved to Valley City. She was “the sample lady” at the Red Owl Grocery Store in Valley City. Gladys enjoyed embroidery work, baking and walking. She was known to walk all around town, even in the middle of the winter, when she was in her 90s. Gladys also enjoyed watching sports on TV, especially basketball. Gladys moved to Bridgeview Estates in July of 2015 and she enjoyed being there. They waited on her hand and foot and she appreciated that. As Gladys said, “I had worked my whole life and was going to enjoy being taken care of.” In March of 2017 she moved to the Sheyenne Care Center. While she was there she made friends with the staff and left a lasting impression on them. Gladys was loved by many and will be missed by all. Gladys is survived by her daughter Mary Ellen Russell, Grand Forks, ND; two sisters, Ruth Kerbaugh, Cooperstown, ND and Nancy Deutscher, Moorhead, MN; sister-in-law Lucille Ratzlaff, Valley City and many nieces and nephews. Gladys was preceded in death by her husband Edwin; her parents Fritz and Viola Priebe; in-laws Fred and Lena Ratzlaff; brother and sister-in-law Earl and Marline Priebe; sister and brother-in-law Mary Jane and William Anderson; sister and brother-in-law Annabelle and Fred Reichert; sister Jean E. Priebe; two brother-in-laws, Rheinhold Deutscher and Walter Kerbaugh; Edwin’s sisters, Margaret Mimnaugh, Lila Yanish, Verna Evenson, Esther Berg, and Darlene Tierce; Edwin’s brothers, Walt, Bill, and Allen; and several nieces and nephews. Funeral arrangements have been entrusted to the Oliver-Nathan Funeral Chapel, Valley City, North Dakota. An online guestbook is available at www.oliver-nathanchapel.com

Gladys Marie (Priebe) Ratzlaff, 98, of Valley City, ND passed away June 21, 2020 at the Sheyenne Care Center in Valley City. The funeral service will be 11 am Saturday, June 27, 2020 at Oliver Nathan Funeral Chapel. Visitation will be one... View Obituary & Service Information

The family of Gladys Ratzlaff created this Life Tributes page to make it easy to share your memories.

Send flowers to the Ratzlaff family.