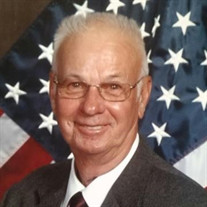 Gerald Milton Langemo was born December 19, 1935 in Valley City, the son of Lillian (Olstad) and Oscar Langemo. He grew up in Norma Township where he attended school at Norma No. 1 also known as the Langemo School. He then attended College High in Valley City where he graduated in 1953. He worked with his father on the farm and also hauled gravel for Glen Daub. He married Linda Englin in 1957. Jerry entered the National Guard in 1958 and after basic training he returned to Valley City and started working at the college power plant for the next 5 years. In 1964, he began working for Valley City Municipal Utilities at the Power Plant and was later transferred to work as a lineman. When his dad retired from farming in 1973 he farmed and continued as a lineman. On September 17, 1976, Jerry married Patsy Keene Zaun. They continued to make their home in Valley City and after 25 years of service at the utilities he retired in 1990. He continued to farm until 2000. Jerry made a yearly trip to Rollag, MN, where he attended the Western Minnesota Steam Thresher Reunion; it was something he started with his father. He squared danced, was an avid golfer, and his favorite enjoyment was making pancakes on Christmas morning for all the grandkids. He was a member of Faith Lutheran Church, the American Legion, AmVets, and the Southeast Dakota 2-Cylinder Club. Jerry is survived by his children, Susan (Todd) McDowell of Jamestown ND, and Scott (Staci) Langemo of Bismarck, ND, Wyatt (Julie) Zaun of Valley City, Darek Zaun of Minot ND, Lennell (Steve) Guertin of Valley City, Kristin (Neil) Swensen of Omaha, NE He has 11 grandchildren, Shane Olson, Karli Skjeret, Ashley Hieb, Trevor Langemo, Jessalyn Langemo, Jaden Langemo, Dustin Zaun, Darren Zaun, John Guertin, Matthew Guertin and Callie Swensen and 13 great grandchildren. He was preceded in death by his parents, his wife, Pat, a sister, Marylyn Langemo, and a step-son, Timothy Zaun. Jerry passed away on February 24, 2018 in the Sheyenne Care Center at the age of 82. The funeral service for Jerry will be 2 pm Friday, March, 2, 2018 at Faith Lutheran Church, Valley City. Visitation will be 5-7 pm Thursday at the church with a prayer service at 7 pm. Visitation will continue one hour before the service at the church. Interment will be later in the spring at Memory Gardens, Valley City. Funeral arrangements have been entrusted to the care of the Oliver-Nathan Funeral Chapel, Valley City. An online guestbook is available at www.oliver-nathanchapel.com

Gerald Milton Langemo was born December 19, 1935 in Valley City, the son of Lillian (Olstad) and Oscar Langemo. He grew up in Norma Township where he attended school at Norma No. 1 also known as the Langemo School. He then attended College... View Obituary & Service Information

The family of Gerald Milton Langemo created this Life Tributes page to make it easy to share your memories.

Send flowers to the Langemo family.