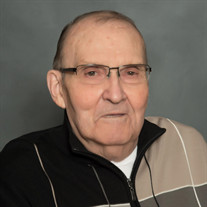 George Schlittenhardt, 85, of Valley City, ND, died on Monday, March 18, 2019 at the Sheyenne Care Center, Valley City, under the care of Hospice of the Red River Valley surrounded by loved ones. George was born in Temvik, ND on February 16, 1934, to Philip and Emma (Taxis) Schlittenhardt and was the fourth of seven children. George graduated from Bismarck High School and later attended and graduated from Sioux Falls College while also serving in the National Guard. On June 29, 1956, George married the love of his life, Alyce Edinger. George and Alyce relocated to Valley City in 1959 where they raised their five children. Throughout the years, George was actively involved in fire fighter organizations, both nationally and throughout the state. He was a member of the ND Fire Prevention Association, the International Society of Fire Service Instructors, the International Association of Fire Chief’s and the ND Fire Chief’s Association. George is a lifetime member of the North Dakota Firefighter’s Association and served the association as East District Trustee for 15 years. He also served as president of the ND Fire Chief’s Association. For 21 years, he served as the Fire Chief in Valley City as well as the Disaster Emergency Director, and Building Inspector. As chief, George continued his role as a firefighter instructor throughout the state. He also taught American Red Cross and First Aid for more than 25 years. As Disaster Emergency Director, he coordinated six successful flood efforts. In attempt to thank the youth throughout the Valley City area who had greatly contributed to the successful flood fights, George was one of the founding members of the Valley City Booster Club.This group was created to help improve local facilities for high school students. George was the recipient of several community awards including the Eagles Civic Award, Mr. Eagle, Valley City Community Service Award. He was inducted into the North Dakota Firefighter’s Hall of Fame for his significant contributions and leadership in fire service field in the state of North Dakota. George’s family was his passion. Other passions included making vegetable soup with a bottomless pot, creating all of his famous snacks and sharing his numerous canned food items. George is survived by his children Connie (Gary) Retterath, Darcy (Mike) Beilke, Kelly (Neil) Pederson, Jeff (Connie) Schlittenhardt, and eight grandchildren, Brady (Kristin) Retterath, Megan Retterath, Dustin (Jill Beilke), Cody (Jenni) Beilke, Melissa (Nate) Cook, Christopher (Jamie) Olson, Talon Schlittenhardt and Kaylee Schlittenhardt and six great grandchildren. He is also survived by a sister Martha Just, and brothers Dennis (Bonnie) and Darrell (Oddie) Schlittenhardt. He was preceded in death by his parents; his wife Alyce (2012), his daughter Vicky Olson (1996), his sisters Ella Skager and Elma Miller and brother Herman. The Staff of the Sheyenne Care Center became his second family. The dignified loving care provided to George will forever be remembered in our hearts. Visitation will be held on Friday, March 22 from 5-7pm with a prayer service at 7 pm at Grace Free Lutheran Church in Valley City. The funeral will be held at Grace Free on March 23 at 11:00 am. In lieu of flowers, memorials may be given in George’s honor to Sheyenne Care Center Therapy Department, the North Dakota Firefighter’s Museum and Hall of Fame located in Garrison, or Hospice of the Red River Valley. Funeral arrangements have been entrusted to the care of the Oliver-Nathan Funeral Chapel, Valley City. An online guestbook is available at www.oliver-nathanchapel.com

George Schlittenhardt, 85, of Valley City, ND, died on Monday, March 18, 2019 at the Sheyenne Care Center, Valley City, under the care of Hospice of the Red River Valley surrounded by loved ones. George was born in Temvik, ND on February 16,... View Obituary & Service Information

The family of George Schlittenhardt created this Life Tributes page to make it easy to share your memories.

Send flowers to the Schlittenhardt family.