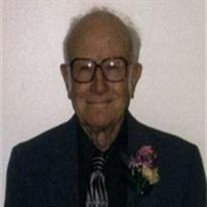 The funeral service for George F. Pabst, Sr., 89, Sanborn, ND, will be 5:00 p.m., Saturday, January 24, 2009 at the Oliver-Nathan Funeral Chapel, Valley City, ND. Deacon Jim McAlister will officiate and burial will be in the spring at Fairview Cemetery, Sanborn. He died at MeritCare Hospital in Fargo, ND on Tuesday, January 20, 2009. Visitation will be Friday from 3:00 p.m. until 7:00 p.m. at the Oliver-Nathan Funeral Chapel and will continue an hour prior to the service on Saturday. George Frederick Pabst, Sr., was born July 21, 1919 in Denver, CO, the son of George and Palma (Teigen) Pabst. At the age of 6, he moved with his family to Hemet, CA. He served in the CCC and then moved to Los Angeles, CA, where he worked for Douglas Aircraft. On March 10, 1944, he was united in marriage to Vivian Broadwell in Los Angeles. In July of 1944, he was drafted into the US Army. He served 18 months in the Philippines before being discharged and returning to Los Angeles. He worked at Douglas Aircraft again until moving to Sanborn, ND in 1948. When they moved to Sanborn, he began farming and did so until retiring in 2002. He was a member of the Eagles, VFW, and the American Legion. He was also a charter member of the Sanborn Fire Department. George liked motorcycles, fishing, boating. He was a very likable person that would do anything for anyone. He spent a lot of time visiting and easily made friends. The most important thing to him was his family. His motto was, “If anything is worth doing, do it right!” George is survived by his wife of 64 years, Vivian; son, George (Wanda) Pabst, Jr. of Sanborn, ND; daughters, Barbara (Freddie) Berg of Valley City, ND and Beverly (LeRoy) Jacobson of Showlow, AZ; 7 grandchildren, James Jacobson, Jody (Tammy) Jacobson, Janie (Don) Gore, Tami (Clayton) Henke, Teri (Gary) Crooks, Jesse (Jodi) Pabst, and Leslie (Merle) Zachrison; and 6 great grandchildren. He was preceded in death by his parents, a brother, and a sister.

The funeral service for George F. Pabst, Sr., 89, Sanborn, ND, will be 5:00 p.m., Saturday, January 24, 2009 at the Oliver-Nathan Funeral Chapel, Valley City, ND. Deacon Jim McAlister will officiate and burial will be in the spring at Fairview... View Obituary & Service Information

The family of George Pabst, Sr. created this Life Tributes page to make it easy to share your memories.