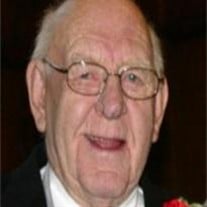 George Brandby Olson died April 20 in St. Joseph, MN., at the age of 87. He was the only son of Peder George and Rosetta Ellanora “Nora” (Brandby) Olson, born Oct. 28, 1922, at home in Prairie Township, LaMoure County, ND, on the farm his family had owned since 1891, and where he lived most of his life. His father was the first pioneer child born in Prairie Township, ND on May 10, 1884. He was the grandson of Lewis M. and Sigrid (Johnson) Olson, pioneer farmers and business and civic leaders in the early days of Litchville, ND. He often said, “The Olson name meant something,” and he lived his life with the honor and integrity being true to this heritage meant to him. He was baptized and confirmed at First Lutheran Church in Litchville, of which his great-grandparents were founding members, and where he was a life-long member and past council member. He was the last descendant of Lewis and Sigrid Olson to serve as sexton of Litchville Cemetery, which began as a family burying ground on their homestead when three of their children died from diphtheria in the 1880s. He served as sexton for 30 years. He married Jean Adeline Gusaas April 16, 1950, and they became the parents of six children. They were married more than 50 years, and he was a devoted caregiver when Jean was diagnosed with ALS in 2000, until her death, Aug. 7, 2002. He enlisted in the U.S. Army during World War II, serving from April 25, 1945 until Dec. 9, 1946, with the 98th Division “Mohawks,” and in occupied Japan with the 75th Armored Division, 767th Tank Batallion. He earned the Expert Infantry Badge, Sharpshooter Badge for M1 Rifle, Asiatic Pacific Service Medal, Victory Medal, and Army of Occupation Medal. He was a charter member of the Leslie Neumann Post 9715 of the Veterans of Foreign Wars. He was proud that his only sister, Pearl Christianson, who served as a U.S. Army nurse during World War II, and was the only woman member of the post. In addition to farming, he worked at Cenex and Miller Elevator in Litchville, and for the North Dakota State Highway Department, retiring in 1987. In 2004, he moved to the St. Cloud, MN, area to live near family. He was endowed with an extraordinary memory and a gift for storytelling. He imparted to his family an oral tradition of stories dating back to his grandfather Elef Brandby’s boyhood in Telemark, Norway, the privations of his pioneer grandparents, and his own boyhood during the dusty days of the Great Depression. All of his stories shared the vivid detail and picturesque phrasing of a master storyteller. He was happiest in nature, and loved the spacious skies of his prairie home, where he learned to shoot, hunt, fish and trap. He had innate mechanical ability, ingenuity, and artistic sense. He could fix anything, build or make what he needed, plant a garden, harvest a crop, ride a horse, milk a cow, turn a lathe, paint a watercolor, and hand-tool leather. He is survived by six children: Cheryl Olson and her husband, John Lorenz, of Hermon, ME; Sheila Olson of Alexandria, MN; Gary Olson and his wife, Ann (Nagel) Olson, of Fargo, ND; Sonja Olson Nelson of Bismarck, ND; Bradley Olson and his wife Xiaoling (Yu) Olson of Sauk Rapids, MN; and Melody Vachal and her husband, Jason Vachal, of St. Cloud, MN; nine grandchildren and five great-grandchildren: Sara Olson and her daughter, Zoe, of Minneapolis; Derek Olson and his wife, Nicole, and their sons, George and Riley, of Fargo; Morgan Olson and his wife, Amber, and their sons, Noah and Elijah, of Frazee, MN; Rachel Olson of St. Paul, MN; Jeremy Such of Grand Forks, ND; Brenna Vachal of Moorhead, MN; Isaac and Shane Vachal of St. Cloud, and Jordan Lorenz of Hermon, ME. He was preceded in death by his parents, his wife, Jean; his sister, Pearl Christianson, of Devils Lake, ND; and his infant granddaughter, R.C. Vachal.

George Brandby Olson died April 20 in St. Joseph, MN., at the age of 87. He was the only son of Peder George and Rosetta Ellanora “Nora” (Brandby) Olson, born Oct. 28, 1922, at home in Prairie Township, LaMoure County, ND, on the farm his family... View Obituary & Service Information

The family of George Olson created this Life Tributes page to make it easy to share your memories.