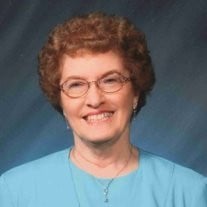 The funeral service for Geneva Shockley, 84, Valley City, ND, will be 10:30 a.m., Friday, August 30, 2013 at Epworth United Methodist Church, Valley City. Burial will be in Sunset Memorial, Jamestown, ND. Visitation will be at the Oliver-Nathan Funeral Chapel on Thursday from 4:00 p.m. until 7:00 p.m. and will continue an hour prior to the service at the church on Friday. Geneva Gertrude Heckman was born, May 19, 1929 to John and Emily (Froelich) Heckman on a farm 7 ½ miles northwest of Valley City, ND. She was baptized and confirmed in the Trinity Lutheran Church of Valley City. She attended Whitcher Grade School #77, promoted in 1944. She attended Valley City High School, graduating in 1948. Upon completion of high school, she went to work for Montgomery Wards of Valley City as credit manager. On September 10, 1950, she was married to Gordon Shockley of Wimbledon, ND. Gordon entered the US Army November 2, 1950. Upon his return from the service, Gordon and Geneva bought his parents’ farm, 4 miles north of Wimbledon. In July 1963, Geneva went to work as a teller at Farmers and Merchants Bank of Wimbledon, now known as Bank Forward. She retired in July 1994. She was active in the Wimbledon community belonging to the Wimbledon Country Club Homemakers, the American Legion Auxiliary, where she was treasurer for 24 years. She also belonged to Band Mothers and PTO. She was active in her church, serving as a Sunday school teacher, Vacation Bible School and Methodist Youth leader, and a member of the United Methodist Women. Geneva enjoyed being a wife, mother, grandmother, and great grandmother. She loved being and doing things with her husband of 53 years such as camping, traveling, dancing, and gardening. Her love for crafts, sewing, and quilting started when her grandmother, Sophia Froelich, taught her how to embroider and crochet. Geneva died at the Sheyenne Care Center on August 25, 2013. She is survived by her sons, Gordon (Judy) Shockley and Glenn (Patricia) Shockley both of Denver, CO; daughters, Gloria Jones of Valley City, Gail (John) Wegner of Cleveland, ND, and Genise (Joe) Clarys of Williston, ND; 15 grandchildren; 17 great grandchildren; and 4 sisters-in-law. She was preceded in death by her husband, Gordon; parents; and her brothers, Lawrence, Lloyd, Bernard; and sister, Dorothy. Funeral arrangements have been entrusted to Oliver-Nathan Funeral Chapel, Valley City, ND. Please visit Geneva’s online guestbook at www.oliver-nathanchapel.com

The funeral service for Geneva Shockley, 84, Valley City, ND, will be 10:30 a.m., Friday, August 30, 2013 at Epworth United Methodist Church, Valley City. Burial will be in Sunset Memorial, Jamestown, ND. Visitation will be at the Oliver-Nathan... View Obituary & Service Information

The family of Geneva Shockley created this Life Tributes page to make it easy to share your memories.

Send flowers to the Shockley family.