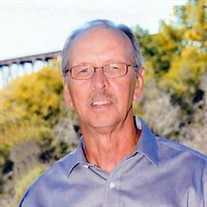 Gale (Buzz) Ervin Eggert, 74, of Valley City, North Dakota, passed away, August 22, 2021, at home surrounded by his family after a 3 ½ year courageous battle with sarcoma cancer. Gale was born April 11, 1947, in Valley City, North Dakota to Irvin and Mabel (Jewett) Eggert. He grew up in Valley City, ND, was baptized, confirmed, and married at Trinity Lutheran Church. He graduated from Valley City High School in 1965. He was a member of the Army National Guard 1965 - 1971. When asked how he got his nickname he was proud to say that he was named after his dad’s buddy in WWII. On May 1, 1971, he married Marjorie Hanson. They raised a daughter, Suzanne, and son, Timothy. Buzz enjoyed pastures, fields, and dusty roads. He loved being a famer and living the country life. He began farming with his dad at an early age, worked 3 years with Electrical Builders then returned to farming on his own until his farm auction in 2002. While farming, he began working as a fieldman for Farm Service Agency and later fulltime employment, retiring in 2009. His best memories include cars, his horses, his dune buggy and spending time at the lake with family and friends. The later years were enjoyed at Dunvilla on Lake Lizzie, MN. Buzz lived his life with kindness and great love of family and friends. He loved spending time with his children and grandchildren. We know his light will continue to shine bright in each of them. Gale is survived by his loving wife of 50 years, Marjorie; along with two children; daughter, Suzanne (Garth) Stenehjem of Phoenix, AZ; and son, Timothy (Trisha) Eggert of Valley City, ND; five grandchildren, Alexis (Matthew) Ottis, William Eggert, Jaden Stenehjem, Carson Eggert, and Mya Stenehjem; and great grandson, Hudson Gale Ottis. He is, also, survived by his four sisters and two brothers, Carolyn (Lee) Samson, Judy (Dick) Grenz, Colleen “Bea” (Gary) Tait, Allan (Jan) Eggert, Patricia (Mike) Conway, James (Marie) Eggert; along with many loving nieces and nephews. Preceded in death by his parents, Irv and Mabel Eggert. The funeral service will be 10:30 am, Friday, August 27, at Trinity Lutheran Church, Valley City. Visitation will be 5 – 7 pm Thursday at the funeral home with a prayer service at 7 pm. Visitation will continue one hour before the service at the church. Burial will be in Memory Gardens, Valley City. A “Celebration of Life” will be held at Dakota Pavillion following the service. Funeral arrangements have been entrusted to the Oliver-Nathan Funeral Chapel, Valley City. An online guestbook is available at www.oliver-nathanchapel.com

The family of Gale "Buzz" Eggert created this Life Tributes page to make it easy to share your memories.

Send flowers to the Eggert family.