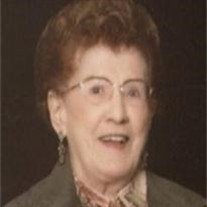 Frances Eileen (Oglesby) Loberg died September 11, 2009, two hours before her 84th Birthday, at Mercy Hospital in Valley City, ND. She was the daughter of Arthur and Alfreda (Flach) Oglesby. Frances was born September 12, 1925 on the homestead farm five miles south of Wimbledon, ND. She attended Uxbridge School until the age of 14 when she went to work to help support her family after the Great Depression. She learned early the meaning of hard work and responsibility doing jobs that ranged from stacking hay with horses to cooking and cleaning for neighboring farm families. At the end of World War II, while working as a waitress in the Dazey Café she met a returning soldier by the name of Elvin Loberg. They were married on August 14th, 1946 in Wimbledon. They made their home in Leal where they owned and operated a grocery store until moving to Wimbledon where Elvin became a self-employed carpenter and builder, and Frances a homemaker and bookkeeper for Great Plains Lumber Company. In 1972, they moved to Jamestown and managed a 12-plex apartment house for Valley Realty. Frances also worked as a waitress for several local restaurants and later was employed at the North Dakota State Hospital. She finally retired at age 80 and moved to Valley City. Fran had many endearing qualities that her family and friends loved and respected her for. She was a woman of strong convictions (and she was usually right). She loved politics, Christmas, and her family. To her children and grandchildren, she was their best friend and strongest advocate. Although never monetarily wealthy, she was rich in compassion for the less fortunate and donated to many charities. She loved to laugh, play practical jokes and tell stories. Frances’ strength of character was a constant source of comfort to all who loved her. She will be dearly missed and never forgotten. Frances is survived by her three children: Wayne (Lydia) Loberg, Ginger (Harold) Taylor, both of Valley City; Jean (Curt) Florhaug, Jamestown; six grandchildren: Leah (Mike) Mancini, Amber (Troy) Magnell; Vickie (Kevin) Crist, Joel (Jeanette) Taylor, Kim (Larry) Johnson, Scott (Karen) Taylor; 8 great-grandchildren; one brother Doug (Lou) Oglesby, Valley City; three sisters, Rose Paasch, Jamestown; Elverna Becker, Valley City and Ardella (Ralph) Fuglestad, Aneta, North Dakota. She was preceded in death by husband, who died in 1981, parents and two brothers, Norman and Arthur Oglesby.

Frances Eileen (Oglesby) Loberg died September 11, 2009, two hours before her 84th Birthday, at Mercy Hospital in Valley City, ND. She was the daughter of Arthur and Alfreda (Flach) Oglesby. Frances was born September 12, 1925 on the homestead... View Obituary & Service Information

The family of Frances Loberg created this Life Tributes page to make it easy to share your memories.

Send flowers to the Loberg family.