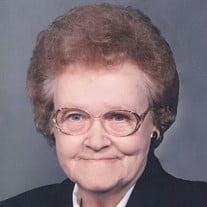 Frances Catherine Latt, 92, Fargo, North Dakota, formerly of Litchville and Valley City, North Dakota, passed away October 15, 2017 at Eventide-Fargo under the care of Hospice of the Red River Valley and with her loving family by her side. Frances Catherine Kreidlkamp was born September 30, 1925, the daughter of Edward and Katherine (Holm) Kreidlkamp. She attended St. Catherine School and graduated from Valley City High School. Frances was united in marriage to Allen Latt on August 2, 1947 at Trinity Lutheran Church, Valley City. They made their home on her grandmother’s farm near Cuba, North Dakota. In 1960, they purchase a farm near Litchville. In 1985, they moved into Litchville and later moved to Valley City. Allen and Frances had moved in to the Legacy Place just before Allen passed away on December 16, 2009. Frances continued living at the Legacy Place until moving to Fargo, where she made her home at Eventide-Fargo. She was a member at Trinity Lutheran Church and also had been active in WELCA. Frances is survived by a son, Rodney (Linda) Latt, Litchville; a daughter, Pamela Kay (Royce) Braley, Fargo; 15 grandchildren; 38 great-grandchildren; a daughter-in-law, Colleen Latt, Vancouver, Washington; a son-in-law, Wayne Urban, Custer, South Dakota; and a sister-in-law, Betty Kreidlkamp, Valley City. She was preceded in death by her parents, her husband, a daughter, Vicki Jo Urban, a son, Dennis Latt, a granddaughter, Sara Latt, and two brothers, Bill Kreidlkamp and Ray Kreidlkamp. The funeral service will be 2 pm, Friday, October, 20, at Trinity Lutheran Church, Valley City. Visitation will be one hour before the service at the church. Burial will be in Woodbine Cemetery, Valley City. Funeral arrangements have been entrusted to the care of the Oliver-Nathan Funeral Chapel, Valley City. An online guestbook for Frances may be found at www.oliver-nathanchapel.com

Frances Catherine Latt, 92, Fargo, North Dakota, formerly of Litchville and Valley City, North Dakota, passed away October 15, 2017 at Eventide-Fargo under the care of Hospice of the Red River Valley and with her loving family by her side. Frances... View Obituary & Service Information

The family of Frances Catherine Latt created this Life Tributes page to make it easy to share your memories.

Send flowers to the Latt family.