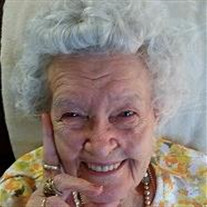 The funeral service for Evelyn L. Kluvers, 93, Valley City, North Dakota formerly of Litchville will be 10:30 am Friday, September 15, 2017 at the First Reformed Church, Litchville. Visitation will be Thursday 5 to 7 pm at the Oliver-Nathan Funeral Chapel, Valley City with a prayer service at 7 pm. Visitation will continue one hour before the service at the church. Burial will be in the Litchville Cemetery. Evelyn LaVerne Boom was born November 28, 1923 in Marion, North Dakota, the daughter of Clarence and Janet (Jongewaard) Boom. She attended the Clark City Country School near Marion. Evelyn then worked at the Marion Hospital until her marriage to Bernard “Bud” Kluvers on June 24, 1943 at her parent’s home. They made their home on the Kluvers’ farm near Litchville. Bud died on December 19, 1979 as a result of a farm accident. Evelyn continued to live on the farm where she taught piano lessons for 50 years. She was also the pianist/organist at the Reformed Church from 1939-2011. Evelyn moved to Valley City on April 7, 2016 where she made her home at Bridgeview Estates. Evelyn is survived by her son, Rodney (Sharon) Kluvers, Litchville; two daughters, Carol (Don) Roy, Hebron, Indiana, and Charlene Kluvers, Cornelius, North Carolina; five grandchildren, 11 great grandchildren and one great great grandson. She is also survived by her sister, Avis Lenssen, Fargo, North Dakota and special friend, Selmer Bubach, Litchville. She was preceded in death by her husband, two brothers, Gene Boom and Loren Boom; and a sister Colleen Rienstra. Evelyn died September 8, 2017 at Mercy Hospital, Valley City. Funeral arrangements have been entrusted to the care of the Oliver-Nathan Funeral Chapel. An online guestbook is available at www.oliver-nathanchapel.com

The funeral service for Evelyn L. Kluvers, 93, Valley City, North Dakota formerly of Litchville will be 10:30 am Friday, September 15, 2017 at the First Reformed Church, Litchville. Visitation will be Thursday 5 to 7 pm at the Oliver-Nathan... View Obituary & Service Information

The family of Evelyn LaVerne Kluvers created this Life Tributes page to make it easy to share your memories.

Send flowers to the Kluvers family.