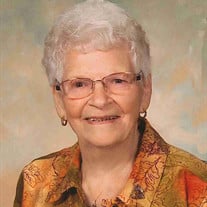 Eunice Arzelle (Bjerke) was born April 29, 1920 in Litchville, ND. She was the daughter of Emil and Emma (Belling) Bjerke. On May 23, 1920, she was baptized in her grandfather, Ole J. Belling’s home, and was confirmed May 20, 1934 at North LaMoure Church. On May 28, 1937, she graduated from Litchville High School. She attended Interstate Business College and graduated from Valley City State College August 3, 1956 with a Standard Degree in Elementary Education. She retired from teaching in 1976 having taught 26 years. November 24, 1944, she was united in marriage to Burnell Peterson at North LaMoure Lutheran Church. Life was rich with love for children, grandchildren, family and friends. She especially enjoyed her grandchildren and great grandchildren. Therefore Eunice could be seen at music concerts, basketball courts, football fields, hockey arenas, ice skating rinks, and yes, even the race track! She was a member of First Lutheran Church, Litchville and their WELCA. Eunice was a resident of Litchville until January 2011 when she left her home and moved to Maryhill Manor in Enderlin, ND. On April 10, 2014, Eunice’s life’s journey on Earth ended. She will be greatly missed by her daughter, Valerie Johnson and her special friend, Carl Opdahl, Marion, ND; her son, Eugene and his wife Ann Peterson, Fargo, ND; her grandchildren, great grandchildren, and a great great granddaughter, Dale (Brandy) Johnson and Carter, Sanborn, ND, Charles (Tami) Johnson and Madison, Lidgerwood, ND, Brent Johnson and Miles, Valley City, ND, Michael (Amy) Peterson and Taylor and Hanna and Isla (Taylor’s daughter), Minneapolis, MN, Kevin (Becky) Peterson and Oakley, Aspyn and Jetta, Beulah, ND, Melissa (Jessie) Ekholm and Rowan and Ada, Rochester, MN; and two sisters-in-law, Margaret Olson, Lisbon, ND and Joyce (Melvin) Lang, Walla Walla, WA. She was preceded in death by her husband, Burnell; parents, Emil and Emma Bjerke; a brother-in-law, LeMoyne Olson; a niece, Susan Olson; and a nephew, Myles Lang. The funeral service for Eunice A. Peterson will be held at 10:30 AM, Monday, April 14, 2014 at First Lutheran Church, Litchville, ND. Burial will be in Memory Gardens, Valley City later in the spring. Visitation will be held an hour prior to the service at the church on Monday. Funeral arrangements have been entrusted to Oliver-Nathan Funeral Chapel, Valley City. An online guestbook is available at www.oliver-nathanchapel.com

The family of Eunice A. Peterson created this Life Tributes page to make it easy to share your memories.