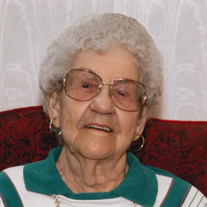 The funeral service for Erna M. Wagner, 95, Valley City, ND formerly of Mandan, ND will be 11 am Tuesday, December 22, 2015 at First Lutheran Church, Mandan, with Rev. Lee Herberg officiating. Burial will be in the ND Veteran’s Cemetery, Mandan. Visitation will be 2-5 pm Monday at the Sheyenne Care Center and one hour before the service at the church. Erna Marie Anderson was born November 17, 1920 in New Salem, ND to Henry R. and Gertrude (Hartmann) Anderson. When she was three years old she and her parents moved to Mandan and she attended school there. They then moved to Dickinson where she graduated from high school. It was there that she met the love of her life, Curt. They dated from 1939-1942. They became engaged on Valentine’s Day in 1942 and married in March 1942 in Hermiston, Oregon. They moved to Mandan and when Curt was in the service she worked at the Singer Sewing Machine Shop which her Dad owned. She was very active at the Syndicate School where she was president of the Mothers Club and helped in various areas at the school. She did a lot of volunteer work which included working at Aid Inc. for 15 years, election official for city and school, she and Curt were chairpersons of the Sister Kenny Foundation for many years. She was a lifelong member of First Lutheran Church in Mandan where she taught Sunday school and Bible school. She and Curt were financial secretaries for many years, set up for communion and worked with Lutheran World Relief. Erna was preceded in death by her husband of 62 years, Curt, her parents and a brother, Percy. She entered the Sheyenne Care Center, Valley City, ND on December 12, 2012. She passed away there on December 17, 2015. Survivors include her daughter, Karen, and son-in-law, Brian Enge, Valley City; a grandson, Brent Enge, Barnesville, Minnesota; a granddaughter, Stacy Jo Healey, Webster, NY and great grandchildren, Brooke, Braxton, Chloe and Alex; two sisters-in-law, Irene Anderson, Strasburg, ND and Mata Wagner, Billings, MT. Funeral arrangements have been entrusted to the care of the Oliver-Nathan Funeral Chapel, Valley City. An online guestbook is available at www.oliver-nathanchapel.com

The family of Erna Marie Wagner created this Life Tributes page to make it easy to share your memories.

Send flowers to the Wagner family.