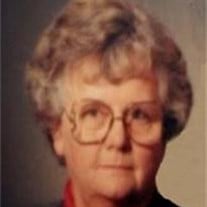 Erma Gertrude Hanson Overby was born Aug 21, 1924 in St. Paul, MN to Alfred and Louise Bell Hanson. She graduated from Kathryn High School and attended Union College briefly. She returned home and attended Valley City State Teacher’s College for 3 months to obtain her teaching certificate. She taught school to save funds to achieve her goal of becoming a Registered Nurse. She obtained a 3 year degree in nursing from Hinsdale Hospital in Chicago and worked for the Shriner’s Crippled Children’s Hospital. She completed her Bachelor’s Degree in Public Health Nursing at the University of Minnesota. She later became the city/school nurse for Valley City and schools. She married Erwin B. Overby in 1961 and became a mother to his three children. Erma served the community of Valley City and the state of North Dakota in many capacities and was still installing Life Lines and doing hospice care into her eighties until it became necessary for her to move to an assisted living facility. During her life, she was a role model to many, an honors scholar, teacher, nurse, Captain in the Army Reserve, wife, mother, grandmother, sister, aunt, and friend. She died June 4, 2012 in the Immanuel Lutheran Skilled Care Center, Kalispell, MT where she had been living. Survivors are one son, Ed (Betty), Valley City; two daughters, Sandra (Wayne) Hall, Suffolk, VA and Glenda (Rick) Funk, Kalispell, MT; two sisters, Jessie (Duane) Schultz, Jamestown, ND and Phyllis Myhre, Cutbank, MT; 3 grandchildren, Heidi Johnson, Valley City, Christina Schauer (Chris Neubert), Kalispell, MT, and Jacob (Patty) Schauer, Missoula, MT; 8 great-grandchildren and many nieces and nephews. She was preceded in death by her husband, Erwin Overby.

The family of Erma Overby created this Life Tributes page to make it easy to share your memories.

Send flowers to the Overby family.