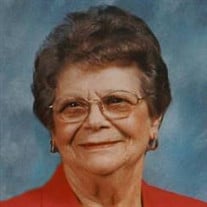 As a glow came over her face and her eyes opening widely with a distant stare, Elsie Marie Tait 96 passed away peacefully at St. Lukes Care Center in Blue Earth, MN on July 31, 2016. This glorious event was witnessed by family that surrounded her. Funeral services will be held at Epworth United Methodist Church in Valley City, ND on Wednesday, August 3, 2016 at 11:00 A.M. Visitation will be held from 5 to 7 P.M. on August 2, 2016 at Epworth United Methodist Church in Valley City, ND and one hour prior to the service at the church. Elsie was born in Jud, ND on July 9th, 1920 to Jacob G. and Martha (Madchke) Nitschke. She attended and graduated from Jud Public School and Valley City State Teachers College. After teaching at Green School, Elsie worked at Montgomery Ward and later at the Fair Store in Valley City. Elsie married Ralph Tait in 1944 at Epworth United Methodist Church. They lived on a farm southwest of Valley City until 2007 when they moved to Valley City. She was a member of the Green Homemakers, a 4-H leader and was active in the women’s divisions of the North Dakota Winter Show, Epworth Methodist Church and Eagles Auxiliary 2192. Elsie and Ralph were recognized with various awards for their dedicated service to their community. Elsie was a very accomplished seamstress and an excellent cook. She could sew it all; from alterations on formal wear to sewing clothes or crafts from patterns she created to patching work clothes. She sewed her daughter's bridal gown and all of the bridesmaid dresses as well as bridesmaid dresses for other family members and friends. When you came to the Tait house you would never leave hungry. Elsie loved to cook and bake and her meals were second to none. It didn't matter if you came on an invitation or stopped by unexpectedly the quality and quantity was always outstanding. Elsie also made sure that you always had something to take with you when you left. It might be her famously delicious caramel rolls, homemade buns, apple crisp, or any food or bake goods she had at the time. Family and friends were very important to Elsie. One of her greatest joys was to have children and especially her grandchildren spend time with her and Ralph at the farm and later at their Valley City apartment. They proudly loved to attend any sports or other activity with family involvement. After Ralph's passing and her eventual move to Blue Earth, her enthusiasm and joy of being part of any family activity or event never diminished. Visits from family near and far brought an intense amount of pleasure to her life. Time spent with family was the ultimate joy of her life; however friends came in a close second. Elsie and Ralph's circle of friends spanned the state and the country as a result of their friendliness and good neighbor attitude. In Blue Earth a new group of friends evolved for Elsie. She continued to stay in contact with those she left through cards, letters, phone calls and occasionally a face to face visit as they passed through her new home town. Preceding Elsie in death were her husband Ralph in 2007, her brother Ervin, her parents, son-in-law, Ron Davies and great-grandson Jacob Riedman. She is survived by her children Karyl and Lester Hintz, Blue Earth, MN, Gary and Bea Tait, Valley City, ND, Kaye and Charles Belzer, Amenia, ND, and Lynn and Cheryl Tait, Alexandria, MN; grandchildren, Jeffery (Kris Kosminskas) Hintz, Michael (Amanda) Hintz, Suzanne (David) Olsen, Kristi (Cory) Anderson, Brian (Kelly) Tait, Brenda (Roger) Erber, Laura (Bret) Stringer, April (Ryan Oksendahl) Davies, Mark Davies, Aaron (Jamie Blazek) Tait, and Alyssa (Jake) Schauer, 19 great-grandchildren, and 1 great-great-granddaughter. Funeral arrangements have been entrusted to the care of the Oliver-Nathan Funeral Chapel, Valley City, North Dakota. An online guestbook is available at www.oliver-nathanchapel.com

As a glow came over her face and her eyes opening widely with a distant stare, Elsie Marie Tait 96 passed away peacefully at St. Lukes Care Center in Blue Earth, MN on July 31, 2016. This glorious event was witnessed by family that surrounded... View Obituary & Service Information

The family of Elsie Marie Tait created this Life Tributes page to make it easy to share your memories.

As a glow came over her face and her eyes opening widely with...

Send flowers to the Tait family.