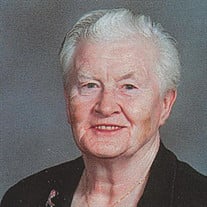 Elsie's funeral service will be live streamed at: https://vimeo.com/489877788 Elsie Benson, age 92, passed away, Saturday, December 5, 2020 at the Sheyenne Care Center, Valley City, ND where she has been a resident for the last few years. Elsie Lorraine Larson was born September 17, 1928 in Ashtabula Township to William and Lottie (Carmen) Larson. She was the youngest of eight children. She grew up on the family farm and attended rural Ashtabula School. In April 1947 she married Henry Knutson to which five children were born, Ira Henry, Judy Ann, Eldred Jerome, Eugene Darrell, and Bonnie Kay. On November 15, 1962 she married Lind E. Benson and two girls, Kimberly Ann and Marie Sandra were added to the family. Elsie grew up surrounded by family and relatives who were quite musical. She loved country music and could play many musical instruments. Lind and Elsie loved to attend the Saturday night dances whenever they could. Living in the country meant the world to her. Gardening and flowers were her favorite hobbies and in the wintertime it was puzzles and bingo for as long as she could. It was hard for her to eventually move to town, but she soon realized many of her friends were now a lot closer by. A stroke and Dementia took a toll on her and that is when she became a resident of the Sheyenne Care Center. Elsie is survived by her children, Ira, Eldred (LaDeen), Eugene, Bonnie Stringer, Kim (Dennis) Bredeson, and Marie (Tracy) Forde, numerous grandchildren, and great-grandchildren. She was preceded in death by her parents, husband Lind, daughter Judy, an infant granddaughter; four brothers and three sisters. Visitation will be 9:30 am Friday, December 11, 2020 at the Oliver-Nathan Funeral Chapel, with a funeral service at 10:30 am. Interment will be at Woodbine Cemetery, Valley City. The family wishes to thank the Sheyenne Care Center Caregivers for their personal dedicated services over the last few years and right up to her final moments. We know many of you have grown close. Funeral arrangements have been entrusted to the care of Oliver-Nathan Funeral Chapel, Valley City. An online guest book is available at www.olivernathanchapel.com

Elsie's funeral service will be live streamed at: https://vimeo.com/489877788 Elsie Benson, age 92, passed away, Saturday, December 5, 2020 at the Sheyenne Care Center, Valley City, ND where she has been a resident for the last few years.... View Obituary & Service Information

The family of Elsie Benson created this Life Tributes page to make it easy to share your memories.

Send flowers to the Benson family.