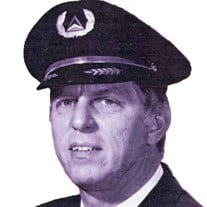 The “Celebration of Life” service for Ellis G. “Rock” Rockswold, 77, Atlanta, Georgia, will be 2 pm Saturday, August 13, 2016 at Trinity Lutheran Church, rural Litchville, North Dakota. He died June 21, 2016 at Emory St. Joseph’s Hospital in Atlanta. Rock is the son of the late Selmer E. and Florence M. Belling Rockswold, born in 1939 at Valley City, North Dakota. He graduated from Litchville High School in 1957 and graduated from NDSU in1962. Rock was united in marriage to Mirtie A. Skow on November 24, 1962. He served seven and a half years as a decorated US Army aviator, flying two tours of duty in Vietnam, retiring as Major in 1970. They made their home in Atlanta. Rock’s joy was flying for Delta Airline; he retired Captain of the B-767 in May 1999, serving the company 29 years. Survivors include his wife, Mirtie; his daughter, Michelle K. Armstrong (Tom) and grandchildren, Erica L. and Patrick T. Armstrong of Salt Lake City; his daughter, Brenda L. Rockswold Ross (Brian) of Snellville; his sister, Carol D. Weiler, Jamestown, ND; and a brother, Steven B. Rockswold (Faye) of Litchville. Memorials contributions are welcome at the Salvation Army, % Joe Lunde 136 3rd St. SE, Valley City, ND 58072. Arrangements are by Oliver-Nathan Funeral Chapel, Valley City, North Dakota. An online guestbook is available at www.oliver-nathanchapel.com

The family of Ellis Gene "Rock" Rockswold created this Life Tributes page to make it easy to share your memories.

The “Celebration of Life” service for Ellis G. “Rock” Rockswold,...

Send flowers to the Rockswold family.