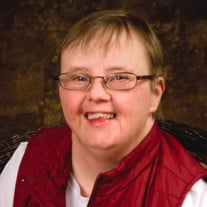 God reached down, took her hand, and brought her home. Elizabeth (Lisa) Ann Warner was born to Kenneth and Jeanette (Faust) Warner of Page, North Dakota on August 15, 1958 in Valley City, North Dakota. She died March 2, 2015. She and her sisters, Susan and Karen, had an idyllic childhood on the family farm. When Lisa turned six, she began school at Jefferson School in Valley City. At the age of nine, Lisa began to spend the school week with Gloria and Victor Engler and later Barbara Barrows. In 1979 Lisa started at the Open Door Center. She spent 34 joyful years there with friends and staff. Lisa loved going on trips and cheering for her beloved Vikings, even when they were losing they were the BEST! Lisa spent over fifteen years working at the Pizza Hut in Valley City; they were an important part of her independence. In 2014 Liza entered the Sheyenne Care Center residing at the Circle of Life Cottage and later moving to the third floor. Going before here were her parents, aunts, uncles and two nieces, Trina and Tina. Cherishing memories of her are her family, Susan (Roger) Bekker, Scobey, Montana; Karen (Joel) Erickson, Page, North Dakota; six nieces and nephews, Jonathan (Janelle), Tania, Melissa, Tricia (Mike), Mandi, and Michael (Kristin) and 14 + 1 (soon-to-be) grand-nieces and nephews. Her special friends, Sue-Ellen and Lynn and her roommate, Bonnie also survive. Her family extends a heartfelt thank you to the Sheyenne Care Center for their loving care and kindness on her journey home and to the Open Door Center for the many opportunities that they gave to her in her years there. She was our special gift! We thank God for her! The funeral service for Lisa will be 1:30 pm Thursday, March 5, at the Sheyenne Care Center Chapel. Visitation will be one hour before the service in the chapel. Oliver-Nathan Funeral Chapel, Valley City, are assisting with the funeral and an online guestbook for Lisa is available at www.oliver-nathanchapel.com

God reached down, took her hand, and brought her home. Elizabeth (Lisa) Ann Warner was born to Kenneth and Jeanette (Faust) Warner of Page, North Dakota on August 15, 1958 in Valley City, North Dakota. She died March 2, 2015. She and her... View Obituary & Service Information

The family of Elizabeth "Lisa" Warner created this Life Tributes page to make it easy to share your memories.

God reached down, took her hand, and brought her home. Elizabeth...

Send flowers to the Warner family.