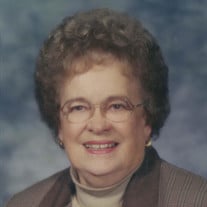 Eleanor Lillian Paulsen, 93, of Luverne, ND, died peacefully, Jan. 20, 2016 at Olive View UCLA Medical Center in Sylmar, Ca. Funeral services will be conducted at 10:30 A.M., Mon. Feb. 1 at the Luverne Lutheran Church with the Rev. Jerry Rosin officiating. A visitation will be held at the Oliver-Nathan Funeral Chapel in Valley City, ND on Sun. Jan. 31 from 5 to 7 P.M. followed by a prayer service. Interment will be in the Luverne cemetery in the spring. Eleanor Lillian Paulsen was born Nov. 11, 1922 in Luverne, the daughter of Christ and Johanne Madsen. She grew up in Luverne and graduated from Luverne High School in 1940. She later moved to Burbank, Ca. where she worked for a short time with Lockheed building aircraft for the war effort. It was at that time, Jan. 9, 1943, she was united in marriage to Andrew Paulsen at Quartzsite, Az. Following the end of the war the couple moved back to Luverne and began farming on the Paulsen family farm. Following Andrew’s death in 1972, Eleanor and son Alan continued to farm for another 12 years. Eleanor and Alan continued to live on the farm during the summer months and spend their winters in Calif. to be near family. Eleanor enjoyed playing cards, taking trips with her sister Doris, and became an avid Laker fan. She was a lifetime member of Luverne Lutheran Church & WELCA. Eleanor is survived by her sons, Gerald (Roxanna) Paulsen, Manhattan Beach, Ca., Don (Kathy) Paulsen, San Diego, Ca., and Alan Paulsen, Luverne, ND; grandchildren, Jami (Bob) Cook, Madison, Wi., Todd Paulsen, San Francisco, Ca., Kristin Paulsen, San Diego, Ca.; step-granddaughters Ashley Shelden and Hilary (Jeff) Weston; great grandchildren Nicole, Elizabeth, and Sarah Cook; sister Doris Weydahl; and many nieces, nephews & friends. Eleanor was preceded in death by her husband, Andrew, parents, brothers Ray and Alvin Madsen, and an infant sister. Funeral arrangements have been entrusted to the care of the Oliver-Nathan Funeral Chapel, Valley City. An online guestbook is available at www.oliver-nathanchapel.com

The family of Eleanor Lillian Paulsen created this Life Tributes page to make it easy to share your memories.

Send flowers to the Paulsen family.