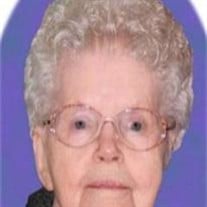 Eleanor Berneice Lewzader was born March 17, 1921 in Valley City, North Dakota, the daughter of William and Caroline (Skonseng) Lewzader. She grew up in Valley City and graduated from Valley City High School. Eleanor became a beautician and later went on to attain her LPN license. She worked for over 25 years at the Sheyenne Care Center and retired in 1986. She enjoyed spending time with her brothers and sisters, nieces and nephews. Eleanor liked the challenge of doing jigsaw puzzles and crossword puzzles. She also loved cats. Eleanor was a member of Grace Free Lutheran Church and was active in the Salvation Army in Valley City until it closed. Survivors are a sister, Agnes Ellsworth, Bismarck, North Dakota, four nieces, Marie Ellsworth, Bismarck, Darlene Boudreau, Bourbonnais, Illinois, Mary Watkins, Whitehall, Pennsylvania, and Lois Wheeler, Des Plaines, Illinois; and a nephew, William Regnier, Manteno, Illinois. She was preceded in death by her parents, two sisters, three brothers and a niece.

The family of Eleanor Lewzader created this Life Tributes page to make it easy to share your memories.

Send flowers to the Lewzader family.