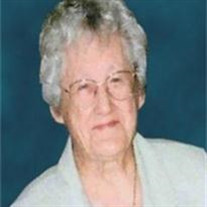 The funeral service for Edna V. Olson, 92, Valley City, North Dakota will be 2:00 p.m., Thursday, March 17, 2011 at Our Savior’s Lutheran Church, Valley City. Burial will be in Memory Gardens, near Valley City, in the spring. She died Sunday, March 13, 2011 at the Villa Maria, Fargo, North Dakota. Visitation will be held at the church one hour prior to the funeral service. Edna Viola Sando was born on October 28, 1918 in Kathryn, North Dakota, the daughter of John and Josephine (Eidsvig) Sando. Following her graduation from Kathryn High School in 1937, she moved to Valley City, North Dakota with her father. On November 23, 1947, she married Melford Olson. They made their home in Valley City, where they raised six children. Edna worked at Valley Lanes and Mac’s Café. She was very involved at Our Savior’s Lutheran Church, and was active in Circle there. Edna was always concerned for the well being of others. Her children and grandchildren were very important to her. She made her home the “gathering place” for family and friends. Her hobbies included reading and gardening. She made many embroidered projects for family and friends. Edna was an avid card player and enjoyed watching Chicago baseball. Edna is survived by her sons, Melford Olson, Jr. of Fargo, North Dakota and Danny (Christine) Olson of Moorhead, Minnesota; daughters, Janet (Dusty) Kracht of Pierre, South Dakota, Carol Johnson of Fargo, ND, and Candace Shipman of Kansas City, Missouri; 15 grandchildren; 23 great grandchildren; a great great granddaughter; sisters, Addy Peterson of LaMoure, North Dakota and Margaret Siler of Menomonie, Wisconsin. She was preceded in death by her parents; daughter, Sandra Baumler; grandson, Anthony Baumler; and a brother, Rolf Sando.

The funeral service for Edna V. Olson, 92, Valley City, North Dakota will be 2:00 p.m., Thursday, March 17, 2011 at Our Savior’s Lutheran Church, Valley City. Burial will be in Memory Gardens, near Valley City, in the spring. She died Sunday,... View Obituary & Service Information

The family of Edna Olson created this Life Tributes page to make it easy to share your memories.