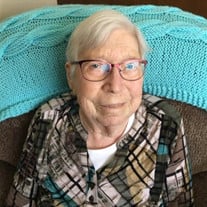 Edna Grace Christianson, age 91, Valley City, ND, moved to heaven on October 29, 2019, after living at the Sheyenne Care Center in Valley City. She was under the care of CHI Health at Home and Hospice, Valley City. Edna was born to Adolf and Laura (Koll) Hoffman on April 20, 1928, in Hardwick, MN. Following her graduation from high school, Edna received her LPN degree from Franklin School of Nursing in Minneapolis, MN. She moved to Hendricks, MN, to begin her nursing career. Edna cared for many as a nurse until her retirement at the age of 75. Edna married Gerald Christianson of Hendricks on November 18, 1950. They farmed near Hendricks where they raised their two children. She was very active in her children's lives as a Sunday school teacher, Luther League leader, Cub Scout den mother, and a 4-H Leader. She loved knitting, sewing for others, and quilting. Edna was a member of Marble Lutheran Church and later a member of Christ Lutheran Church in Hendricks, MN. After her husband died in 1999, she moved into the town of Hendricks. In 2005, Edna moved to Valley City, ND, to be closer to family. She was a member of Trinity Lutheran Church, Valley City, where she was involved with the quilters. Edna is survived by her children, Kathleen (Thomas) Utke of Oriska, ND, and David Christianson of St. Charles, MO; grandchildren, Laura Utke (Brenda Hart), Hudson, WI, and Peter (Kelly) Utke, Oriska, ND; great-grandchildren Claire and Mackenzie Utke, Oriska, ND; a brother Robert Hoffman, Sioux Falls, SD; sisters-in-law, Lela Hoffman, Dolton, SD and Jane Hoffman, Sioux Falls, SD; and many nieces and nephews. Edna is preceded in death by her parents; husband Gerald; a sister Ethel Remme; and four brothers, Roy, Walter, Harold, and Donald Hoffman; brothers-in-law, Milford Remme and Harvey Teigland; and sisters-in-law, Ida Hoffman, Marge Hoffman, Mary Hoffman and Leafie Teigland. The funeral service for Edna will be 2:00 pm, Saturday, November 9, 2019 at Trinity Lutheran Church, Valley City with visitation one hour prior to the funeral service. Inurnment will be at Marble Lutheran Church Cemetery, Canby, MN. Funeral arrangements have been entrusted to the care of the Oliver-Nathan Funeral Chapel, Valley City. An online guestbook is available at www.oliver-nathanchapel.com.

Edna Grace Christianson, age 91, Valley City, ND, moved to heaven on October 29, 2019, after living at the Sheyenne Care Center in Valley City. She was under the care of CHI Health at Home and Hospice, Valley City. Edna was born to Adolf and... View Obituary & Service Information

The family of Edna Grace Christianson created this Life Tributes page to make it easy to share your memories.

Send flowers to the Christianson family.