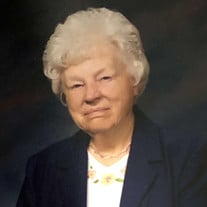 Edith Thelma Marie (Sandstrom) Zacharias, 98, of Kathryn, North Dakota passed away Saturday, January 19, 2019 at Maryhill Manor in Enderlin, North Dakota. Edith Thelma Marie Sandstrom was born on November 22, 1920 in Enderlin, North Dakota.She was the daughter of her late parents, Gustaf (Gust) and Tina M. (Rolie) Sandstrom. She attended school at the Moore Township country school, and later her brother (Ed) made sure she graduated from Enderlin High School in 1939. She met and Married Vincent E Zacharias on February 1, 1942, in a Parsonage of Rural Kathryn. They settled on the farm near Eastedge, North Dakota. They worked on the farm and through their married life, they raised turkeys, milked cows, made meals, and raised four sons. She was a member of Waldheim Lutheran Church, active in the women’s quartet, Waldheim WELCA, and quilted with the women of the church. For 17 years Edith and Vincent would take off in their 1978 Lincoln Continental to spend the winter in Lufkin, Texas. During the last few years Edith was able to check a few things off her bucket list, like going to Red Hawks game and taking a short ride in a 4-seater airplane. Edith is survived by her four sons, Keith of Houston, Texas, Bruce of Kathryn, North Dakota, Lynn (Donna) of Sioux Falls, South Dakota, and Vaughn (Dorinda) of Kathryn, North Dakota, eight grandchildren, seven great-grandchildren, and several nieces and nephews. She was preceded in death by her parents, her husband, and her five siblings, brothers Art Sandstrom, Ed Sandstrom, Rudy Sandstrom, and sisters Ella Jordet and Ester Athow. The visitation for Edith will be Wednesday, January 23 from 3 to 4 pm at the Oliver-Nathan Funeral Chapel, Valley City, North Dakota with the funeral following at 4 pm in the chapel. Funeral arrangements have been entrusted to the care of the Oliver-Nathan Funeral Chapel. An online guestbook is available at www.oliver-nathanchapel.com

The family of Edith Thelma Marie Zacharias created this Life Tributes page to make it easy to share your memories.

Send flowers to the Zacharias family.