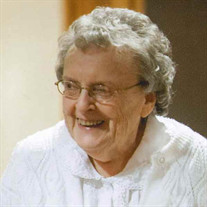 Edith Salome Hammer was born April 11th, 1923 in rural Fort Ransom, ND, youngest child of Marcus and Henrietta (Etta) Rufsvold. She attended elementary and high school in Fort Ransom, graduating in 1941. During World War II, Edith moved to Minneapolis to work for Honeywell. Around the time the war ended, she moved back home to her parents’ farm. One day, while at Fort Ransom, she was sitting in the car waiting for her folks when a man approached the vehicle. He asked, “You’re Edith, yes? I’d like to take you on a date. ”From then forward, they were a couple. On June 24th, 1950, Orin J. Hammer and Edith were married. Orin and Edith farmed north of Fort Ransom in Preston Township living on the Hammer homestead. In January 1956, they were elated with the birth of their son, Myron. Edith’s favorite job was being a mother. Orin and Edith moved into Fort Ransom in 1982 after Myron took over the farm. Edith spent her days being Orin’s caregiver, providing daycare for her “favorite” [only] grandchild, Jessinta, and was very active in both her community and the church. She was involved in SVACA, Sodbusters, Ladies’ Aid, the Red Hats Association, church Circle/Bible Study, and serving lunch at the Senior Center. She maintained a beautiful flowerbed and had a few houseplants. Edith was known for her African Violets. She always had a garden and would can lots of produce every year. Orin passed away in March 2003. Edith continued living at the house on Bluff Street until December 2007 when she moved into the Beverly Anne Assisted Living Center in Lisbon, ND. While at the Beverly Anne, she completed many puzzles, read many books, and always enjoyed playing beanbag-toss frequently winning the game. It’s really hard to showcase a whole life well-lived in a few simple paragraphs. Live well - Edith sure did! Everyone would describe Edith as very sweet, thoughtful, spunky, and endearing. She was a very content woman who lived by the word of the Bible. Edith never participated in gossip and always withheld judgment. She listened intently to others; her advice was simple and well thought out. One of the best lessons she taught Jessinta was, “There are only two things to stress over: things you can do something about so do it, or things you can’t do anything about so pray about it, then move on so it doesn’t consume your mind.” She was no stranger to the outdoors. In her youth, she would go hunting with her brothers in their pasture. One day she got to carry the gun. She saw a jack rabbit a good distance away at a dead run, and lifted the gun to take aim. Her brothers told her, “Put that gun down! Don’t waste ammo, Edith.” Edith pulled the trigger and brought supper home! Her brothers always would tease her she actually missed, and the rabbit just died of a heart attack. Edith was tickled pink when she was asked to name her youngest great-grandson. Originally, she named him Jens, but with her strong Norwegian drawl, she added a “t” pronouncing it Jents. Jessinta and Lee ended up spelling it the same way Grandma pronounced it, being able to hear Grandma in his name. Up to her very last day on this side of eternity, Edith had an outstanding memory, and was very quick witted. She definitely had a sense of humor and enjoyed the occasional innocent practical joke. She lived a remarkable, happy 99 years joining her Lord and Savior on May 5th, 2022. She is survived by her son, Myron; her granddaughter, Jessinta (Lee) Widdel; four great-grandchildren: Orin, Bia, Etta, & Jents; nieces: Shari (Bill) Jaques, Kathy (Don) Carlson, & Carol (Mark) Johnson; and nephew, Kermit (Marty) Rufsvold. She is preceded in death by her parents; her husband; brothers: Oliver, Mark, & Kermit; and daughter-in-law, Jane. Visitation and prayer service will be held on Sunday May 8th at 6:00 pm at Preston Lutheran Church in rural Fort Ransom. Her funeral is Monday, May 9th at 10:30 am at Preston Lutheran Church. Burial will be in Preston Cemetery following her service.

The family of Edith Salome Hammer created this Life Tributes page to make it easy to share your memories.

Send flowers to the Hammer family.