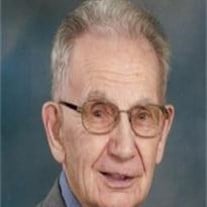 Earl Lester Speicher was born May 13, 1919 in Riverside Hospital to William and Pauline (Triebold) Speicher, at Valley City, North Dakota. Lester was baptized and confirmed at Trinity Lutheran Church in Valley City. He grew up in Alta Township, attending Alta rural school, and College High School, graduating in 1937. After graduation, Lester worked briefly for Farmers Union Oil Company. He returned to the family farm and ran a small grains and dairy farm until he retired. In 1946, Lester was united in marriage to Opal Dotson at Trinity Lutheran Church, Valley City. They lived on the family farm, farming together, until Opal passed away in 1996, at which time he moved to Valley City. Lester was involved in many activities over the years. He was a School board member for Alta, a one-room school, as well as the Oriska Public School. He served on the Alta Township Board in many capacities for 40 years. He was a board member of the Barnes County Farmer’s Union and Barnes County Co-operative Creamery. Lester also was a board member and past president of the Barnes County Historical Society and Barnes County Seniors Council. He was a past member of the Trinity Lutheran Church Council and a long time member of the Dakota Antique and Collectors Club. Lester’s hobbies were gardening, stained glass, and antiques. Later years he spent many hours on his computer, surfing the web and sending e-mail, as well as skyping with his friends and family. He enjoyed working with digital photography and sharing photos with friends. Earl Lester Speicher, 92, died May 9, 2012, in Villa Maria Care Center in Fargo. He is survived by one son, Paul (Cathy), West Fargo, two daughters, Lynel (John) Schleicher, Crookston, MN, June (Steven) Aabye, Fargo, seven grandchildren and eight great-grandchildren. He was preceded in death by his parents, his wife of 50 years, Opal, and one grandson.

Earl Lester Speicher was born May 13, 1919 in Riverside Hospital to William and Pauline (Triebold) Speicher, at Valley City, North Dakota. Lester was baptized and confirmed at Trinity Lutheran Church in Valley City. He grew up in Alta Township,... View Obituary & Service Information

The family of Earl Lester Speicher created this Life Tributes page to make it easy to share your memories.

Earl Lester Speicher was born May 13, 1919 in Riverside Hospital...

Send flowers to the Speicher family.